The Funeral of Fr. Timothy Welsh

Last Saturday, July 17th at 5:30 in the evening, Fr. Timothy Liguori Welsh passed into God from his hospital bed at Mercy Hospital in Dubuque. He suffered a massive stroke one week before but was active in the community up to that point.

I want to offer my condolences to Nan Howley, his niece, and Bill Welsh, his nephew, and his grand niece and nephew who are with us this morning. Fr. Tim is the last of his family of eight brothers and sisters.

The Latin title of the entrance hymn we sang this morning is, “Finita iam sunt Praelia. This translates as “The battle is now over.” I remember serving Fr. Tim’s Mass over 45 years ago and saying the prayers after Mass with him at the foot of the altar, “St. Michael the Archangel defend us in battle“. The word battle fits Fr. Timothy rather well. He was always in battle with someone. The cantor, the abbot, the sub-prior — who in the old days gave out the work—Fr. Tim never thought he got enough help for the orchard—and always the farm boss, whoever he was, and the garage mechanic, who never fixed his sprayer quick enough. Anyone in authority would have an ongoing battle with Fr. Tim. 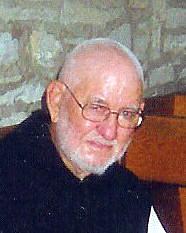 To my mind battle is different than fighting or arguing. Fighting is more personal and arguing more rational, but battle is a way of life. It is part of everyone’s life. It is the struggle to survive. There is a book—a classic of the interior life—entitled, “The Spiritual Combat“. We are all engaged in this type of combat. No one glides through life without a struggle. We can waste a lot of time and expend a lot of energy trying to make things as comfortable for ourselves as possible but this was not Fr. Tim’s way. Tim needed opposition to be true to himself. Those of us who knew his brothers and sisters knew the Welsh’s were no weaklings. They had strongly held opinions and knew how to defend them. They were fiercely loyal to each other,  to attack one was to take on the whole family. It was the Welsh’s against the world. Fr. Tim took this family trait and fit it into the hard side of monastic life. The penance and austerity, what Benedict calls the dura and aspera, the hard and difficult ways that lead to life. Fr. Tim entered New Melleray in 1939 after being four years with the holy Cross Fathers at Notre Dame. What made him transfer? I wonder if it was not the challenge the life offered at that time. Just the physical challenge made one think it was a total offering of oneself. A strong willed person needed a strong challenge. Among other aspects of the life, the orchard was a God-send for Tim. He could go out in the dead of winter and prune his trees, and I mean the dead of winter. In an entry he made to his diary for Jan. 12,1974, in sort of a nonchalant manner, he says, “Coldest day yet. 20 below when I went to the orchard to work. Cleared snow from the trees in the north orchard”! Twenty below zero and he is out in the orchard working—this is a man who has the constitution of a bear.

Each of us has to work with the temperament God had given us. Thankfully the monastic life is broad enough to embrace all kinds of temperaments. What is important is that we are authentic and real in choosing what fits our temperament. I don’t think anyone could say Fr. Timothy was not real, not authentic. 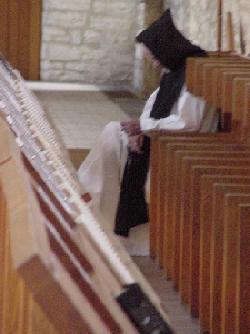 I was his abbot for 21 years and of course we had a few battles but I never really found this difficult because it was never personal. I just happened to be the abbot and that alone was enough for a battle. This was just part of Tim’s temperament.

Sometimes guest, from the vantage point of the guest chapel, can see things our jaundiced eyes miss. One women who comes to Mass here frequently said she cannot think of Fr. Timothy without thinking steadfast. I think that sums it up pretty well. He was steadfast in his observance of the monastic life for 65 years. Above all he was steadfast in his zeal for the Divine Office which is called the main work of the monk. If Timothy missed an hour of the office you knew he had a good reason. In the last years of his life he had the practice of arriving in the church at least a half hour before the office would begin. I think he thought I was going to block his way. But really this was a characteristic of his whole monastic life. He participated fully in the common exercises of the community. Down deep he knew he needed the community to be true to his vocation.

Steadfast is not a quality we think of very often but it is sorely needed in our modern world of change. Steadfast means not subject to change, firm in our belief, determined. All of us need a solid core to our faith in life. We need to hold onto something that will not betray us or let us down. We need to know that as our life unfolds we are being guided by a love that endures and is true. Fr. Tim was determined in his faith. In a certain way he kept his initial zeal for the monastic life. As we made necessary changes in the way we lived he would be the last hold out. He knew himself well enough to know he needed the challenge of austerity. He was a witness and a reminder to us not to cast away the old ways too readily.

For Fr. Tim “The strife is o’er the battle done, the victory of life is won…” His steadfastness, his endurance, his perseverance has brought him to the end of his journey. God called him to the monastic life and watched over him for 65 years. Now he is enjoying the banquet Isaiah spoke of in the first reading and we are left with the blessed memory of a man with a strong personality who was tempered by community life and saved, not by his own efforts but by the grace of Christ.