The Second Sunday of Lent at Mississippi Abbey

Events in the life of Christ and his words are sources of grace that give us strength to cope with what happens in our lives. And our experiences can deepen our union with Christ in the mysteries of his life. Early in the morning on 9/11 the alarm clock woke up Lisa and Todd Beamer. Todd rolled over and silenced the annoying sound while Lisa pulled the covers over her head. They had just returned the day before from a week’s vacation in Rome. Lisa was five months pregnant. Todd, who tended to be a workaholic, had to fly that day from Newark to San Francisco for an important business meeting. Eight years earlier Lisa and Todd were on top of Turkey Mountain in view of the Twin Towers projecting from New York City’s distant skyline. With a twinkle in his eye Todd asked, “Would it be so bad to be my wife?” She replied, “No, but if this is a proposal, should I say yes?” “Will you?” he asked. “Yes,” she said, “I will marry you.” They lived together on the mountain top of happiness from then on. It was a dream marriage and he was a great father who loved to play with his boys, both less than four years old. “Come on, guys,” he’d say, “put on your coats. Let’s roll.” Before leaving for the airport that morning he kissed her good-bye as he always did. Then she snuggle down, burying herself in the blankets to sleep a little longer. Life was very good.

Jesus, Peter, James and John, climbed to the top of a high mountain where he was transfigured before them. With the happiness of heaven spilling all around them Peter recalls, “We were eyewitnesses of his majesty, of the honor and glory he received from the Father saying, ‘This is my Beloved Son, with whom I am well pleased.’  We heard this voice come from heaven while we were with him on the holy mountain,” . Their lives had never been this good before, but death was just over the horizon.

A few minutes after nine o’clock on 9/11 the phone rang. Lisa’s friend, Elaine, told her to turn on the TV. She wanted to know if Todd was traveling that day. Lisa writes, “I stared in disbelief at the events unfolding live on television, and my heart began pounding faster. I walked to the laundry room and burst into tears.” Three and a half year old David, asked, “What’s wrong, Mommy?” She replied, “I just don’t know where Daddy is right now, I’m sure he’s fine; but I just don’t know what’s going on.” Elaine arrived and together they watched the Twin Towers collapse one after the other. Later a newscaster reported that United Airline’s flight 93 out of Newark to San Francisco had just crashed in a Pennsylvania countryside. Lisa screamed helplessly at the television, “No!” It seemed her heart would explode. She fell to her hands and knees and gasped again, “No!” 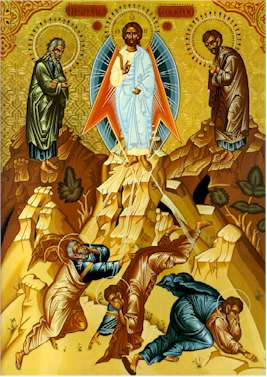 Coming down from the mountain top Jesus charged his disciples to tell no one what they had seen until the Son of Man, after suffering greatly and being treated with contempt, had risen from the dead. They listened in confusion to Jesus’ prophecy of a violent death. It dropped down like a dark fog and chilled their hearts. They shuddered and wondered just what was going on. They had been on the mountain top of happiness. Did they have to come down to the dark places of death and suffering, to injustice, persecution, terrorism or war? Yes, they did, not because God wants it, but because we are able to do good or to do evil to one another, to take lives or to save them.

Lisa Beamer learned what happened on flight 93 from a telephone operator in Chicago who picked up a call from Todd using the airplane’s GTE Airfone. For the last fifteen minutes of the flight she talked with him. He asked her to tell his family how much he loved them. When the plane lurched erratically he cried out. He told her they were planning to do something. Then he asked her to recite the Lord’s Prayer with him. He wanted forgiveness and deliverance from evil. At the end he said, “Jesus, help me.” Then Todd recited the Good Shepherd Psalm by heart and she heard others join with him. After that he sighed and took a deep breath. She overheard him say, “Are you ready? Okay. Let’s roll.” People on the ground saw the plane rocking from side to side and then suddenly it flipped over and streaked straight down to the earth. It was not many minutes from Washington D.C.

At the end of the Last Supper, knowing what was to happen, Jesus said to his disciples, “Rise, let us go.” He went through agony. He prayed, “Father, if it be possible, let this cup pass from me.” But when his hour came he freely chose to give his life to save the world. 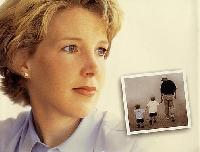 When Lisa Beamer visited the site of the plane crash tears streamed down her face. She left pictures of Todd and the boys, along with notes from family members, and a package of M&M’s, Todd’s favorite candy. She had no doubt that if Todd or the others had been given a choice none of them would have boarded that flight. Right down to Todd’s last words, “Let’s roll,” she knew the true desire of their hearts was somehow to try and get back home to their loved ones. They didn’t want to die. She writes, “Yet there was one who came to earth knowing ahead of time that his most important purpose in living would be accomplished only through his dying. He really didn’t want to die either. But he was destined to give his life so that others might find more abundant life on earth, and eternal life in heaven to come.” She looked up at the sky and saw a hawk soaring above the field. It reminded her of words from the prophet Isaiah, “Even youths grow tired and weary, and young men stumble and fall; but those who hope in the Lord will renew their strength. They will soar on wings like eagles; they will run and not grow weary, they will walk and not be faint,“. She had a sense of Todd’s new happiness. Peace flowed over her. She continues, “Tears still show up often … But life on earth is happiness mixed with sadness. True joy will never come here, … but knowing it awaits me in eternity helps me through whatever life brings in the darkest of times. God has whispered two words to me over and over: Look up … Look up.”

Long after the Transfiguration and the Crucifixion, St. Peter remembered the heavenly happiness that flowed over him on Mount Tabor. He writes, “Be attentive to this prophetic message as a lamp shining in a dark place until day dawns and the morning star rises in your hearts,” .

Lisa and Todd Beamer were in a very dark place. But the life of Christ and the Word of God strengthened them. They knew the end is not Crucifixion but Transfiguration. Lisa writes, “I don’t think Todd chose to die, he chose that God’s will be done in his life. … Todd was willing not only to die for his faith … but to live for his faith all the way to the end. … The road ahead is uncertain and even scary at times, but I believe God will provide … It is well, it is well with my soul.” In the dedication of her book, “Let’s Roll,”1 she expresses this act of love: “Thank you, Todd, for loving God, for loving us. I love you and promise to finish our journey well. See you later.” All of us share this same hope because of the promise of Jesus, “In a little while you will see me no more; again in a little while you will see me. I will see you again and your hearts will rejoice and no one will take your joy from you,“. Eternal life is very good.