The Seventeeth Sunday of Ordinary Time

For any families that might be with us this morning who take regular vacations together, I have a suggestion for a game you can play during a long trip in the car — the game is called: “What are monks good for?” It’s an easy game to play. Mom turns around in the front seat and asks the kids: “What are monks good for?” But before the game begins, Mom explains to the kids that monks don’t work in hospitals; they don’t teach school; they don’t give retreats; they don’t do missionary work—in fact they’re involved in no active ministry at all. They never leave the monastery and they’re very existence is unknown to most people. When all this has been made clear, then the kids try to guess what monks are good for. There is one possible danger with this game. It could happen, after venturing a few guesses, one of the kids says: “Hey, mom, what are monks good for anyway?”, and mom doesn’t know the answer. But in that case she could say something like: “Uh—you’ll understand when you get a little older.” I might suggest too that you save this game for a rather long trip in the car, since most people in our contemporary American culture, adults as well as kids, are going to need some time to answer this question. There are places like India and parts of Africa, where there is a longstanding appreciation for the contemplative life. In North America in the third millenium however, even open-minded and religious people struggle with the idea of contemplation as a vocation. A contemplative doesn’t do anything.

The seminary I attended several years ago, was run by Benedictine monks, and at a student government meeting one day, we were discussing the fact that somebody had stolen the stereo out of the student lounge. It was decided to buy a new one, but somebody asked: How do we insure the new stereo doesn’t get stolen? A seminarian replied: “We could just have a monk sit next to it.”

Everybody burst out laughing, but for a moment it was silent as we all sat there and pictured in our minds this really old monk with a long gray beard, sitting next to a stereo console all day and all night, being brought his meals, books to read, and a pillow at night, and we were thinking: “Well—it might work. He’s a monk. He doesn’t have anything else to do.” Any kids here this morning might note that—If Mom asks you: “What are monks good for?”, you can say: “Guarding stereos”. 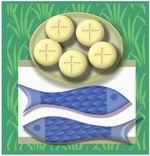 Seriously, people often visit monasteries and ask: “What exactly do you guys do here?” It’s not clear to many people what contribution monks make to a world, whose agony they watch on television every day. The same might be said about the five loaves and two fish featured in today’s gospel. We can imagine the people of Tiberias saying: “Ha! Five loaves and two fish. What are these good for? There are five thousand hungry people here!” But, here’s something interesting. Realizing they have no food, what do the people of Tiberias do next? They do nothing—absolutely nothing. Their response to their predicament is completely passive. There are three verbs the gospel uses to describe the people of Tiberias. They “follow“; they “recline” and they “eat.” They follow—because they have diseases and want to be cured. They recline—because they are told to, and they eat—because they are hungry. And strangest of all, at the very moment they discover they have nothing to eat, the very moment that should have stirred them to decisive action, they bend down and recline on the grass. And when they have laid down and are quite comfortable, having not lifted a finger to secure food for themselves, the people of Tiberias are treated to a hearty meal; an astonishing super-abundance of food; more than enough to feed and satisfy five thousand hungry people. They become witnesses of one of the most remarkable miracles Jesus ever performed. What happened on the shore of Tiberias?

It’s interesting to note that, on one other occasion, with Satan in the desert, Jesus was asked to produce bread by a miracle a rather modest request in light of today’s gospel: Satan only asked Jesus to change one stone into one loaf of bread, and Jesus—refused. Isn’t that interesting. Such a puny request. Why would Jesus refuse except that, had he made that stone into bread, there would have been nobody to eat it—only himself. He couldn’t have given that bread away to anyone. But God making breakfast for Himself alone in the desert—is not a miracle. A miracle requires people—people in need, and who can’t help themselves; people like those of Tiberias. And a miracle requires poverty; poverty like five loaves and two fish. It was the people of Tiberias and their poverty, that made the working of a miracle possible.

And so, at the risk of jumping to conclusions, I am going to suggest that If five loaves and two fish are after all, good for something, then maybe monks are too. What are monks good for? Monks are food; food given by Christ to a world—that cannot feed itself. What do I mean? Look at the monks of New Melleray. We are a community small in number; mostly elderly men. We do not, at first sight, look like a sumptuous meal to satiate the world’s spiritual hunger. We are five loaves and two fish. And yet this community has nourished and continues to nourish countless numbers of people who visit this monastery every year from all over the country.

This is a miracle. But you will not experience the miracle of New Melleray Abbey, so long as you are standing tall in the belief that you can feed yourself; strong, and self-reliant in pursuit of your personal ambitions. To be fed by this miraculous bread, you must first recline on the grass—not bodily. In spirit you must lie down. Your hyper-active self-seeking will must lie down and experience God’s grace like an expanse of cool grass beneath you. You must recline. Something in you may resist lowering yourself to the grass; to recline in spirit; to be inactive and helpless; to make a retreat; to be still; knowing all the important work you could be doing out there. The choice is yours, but until your spirit bends down and stretches out on this cool grass, the miraculous bread does not appear. You will see nothing at New Melleray Abbey but a community of elderly men. Five loaves and two fish. Brothers and sisters, you must understand, what I am saying is not merely an invitation to a spiritual coffee break. It is a call to obedience.

When a monk says to you: “Make time for prayer; make time for God; ponder the scriptures; listen to the Spirit. Stop running around all the time; be still!” This is not the voice of some gentle boob luring you away from what you know better than he is the real business of life. In the voice of a monk the will of God is being communicated to you even as the people of Tiberias heard the voice of the apostles in today’s gospel. In the voice of a monk the apostles themselves are addressing you: Peter, Andrew, Thomas, with strong, urgent, manly voices and hearts inspired by the most intimate knowledge of Jesus; the apostles are addressing you across a sunlit slope on the shore of Tiberias. They’re speaking to you. Breathless and excited, they are giving you a command: “Lie down! Lie down, all of you – lie down on the grass! This comes from the Master! It is his will. Obey him. Do it now.” In the voice of a monk Jesus is addressing you, “Lie down on the grass!” And through him the Almighty Father, who said to the Son: “Lie down my only begotten; my Son. Lie down – it is my will. Lie down in the grave, and I will raise you up! Lay down your life for me, and I will raise you up!”

Brothers and sisters a monk is telling you now, make time in your day for God; make time to be still. Lie down on the grass—trust Him, or all your dreams and strivings will be in vain; ultimately without meaning and bringing little satisfaction. You cannot feed yourself. Lie down on the grass; and God will feed you. This is a command. It comes from the Lord. It is addressed to you