The Solemnity of Christ the King

One day a Texan visited New Melleray. After the abbot gave him a tour of our eighteen hundred acre farm the visitor remarked, “In Texas we have front lawns larger than your whole farm.” After seeing our Church he boasted, “We have telephone booths that are bigger.” The abbot was annoyed with all his exaggerations so he got a snapping turtle and put it under the covers of the Texan’s bed. When he showed the visitor his room for the night there was a large lump under the blankets. The Southerner turned back the covers and exclaimed, “Good heavens! What’s that?” The abbot said nonchalantly, “Why, that’s only an Iowa bedbug.” The Texan looked again and replied, “Well, I guess it is. But it’s a young one, isn’t it?” 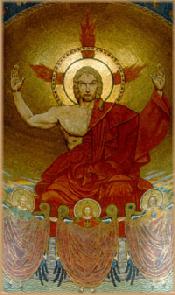 Is the description of Christ the King coming on the clouds of heaven at the end of time a Texan exaggeration? Will the sun and moon be darkened, will stars fall from the sky and the powers of heaven be shaken? John the Baptist expected the Christ to come in power with an axe in his hand to cut down every fruitless tree. Instead, Jesus came in meekness with mercy, looking nothing like a king when he was put on trial and condemned to death by Pontius Pilate. Are we to think that the second time Jesus comes he will do it right, that he will shake not only the Roman Empire, but all the empires of the world? When Jesus comes as King, Pantocrator, Ruler of the Universe, will he bare the muscles of his right arm, shake the heavens, scatter the stars, and snuff them out? Or is the story rather Texan?

True, the sun and moon will eventually darken, but can stars actually fall, is there up and down in outer space? What does the Gospel mean? Once an old man with a long white beard stood on the shoulder of a country road with his elderly wife holding up a sign that said: “Stop before it’s too late! Turn around, the end is near.” A car full of teenagers slowed down just enough to wave and laugh at them, and then sped around the next corner. A moment later there was a screech of tires, a bit of silence and a loud splash of water. The old man’s wife said to him, “Maybe we should write, ‘Stop, the bridge is out.'” Is the catastrophe about which the Gospel warns us something far off in the future, or around the corner? 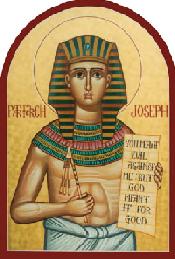 Perhaps the images of universal destruction are not Texan exaggerations, but are symbols like those in the story of the Patriarch Joseph in the book of Genesis. Joseph dreamed that the sun, moon and eleven stars, symbols of his parents and brothers, fell prostrate to the ground before him. And so it happened. When they came to Egypt his brothers fulfilled the vision, falling down before him, powerless and greatly afraid. But the Patriarch Joseph, who is a Christ figure, used his royal power not to crush but to forgive his repentant brothers. He said, “I am your brother, Joseph, whom you sold into Egypt. And now do not be distressed, or angry with yourselves, because you sold me here; for God sent me before you to preserve life … Do not fear, I will provide for you and your little ones,” The image of stars falling from heaven, literally “falling powerless to the ground,” is a symbol of the collapse of sinners in the presence of God. When soldiers came to arrest Jesus in the Garden of Gethsemani Jesus asked, “Whom are you looking for?” They replied, “Jesus of Nazareth.” When he identified himself by using the divine name, “I AM,” they stumbled backwards and fell to the ground. Falling stars and the darkening of sun and moon are symbols for unrepentant sinners of all times.

The coming of Christ the King is a story about divine love and about the dangers ahead of us, what we must fear. Not the power of Christ the King who loves us and always comes offering forgiveness to the repentant, but the power of man and Satan trying to turn everyone to unrighteousness. Jesus sets aside the symbolic warning sign and speaks plainly, “Nation will rise against nation, … you will be beaten, … put to death, … hated by all for my name’s sake,” “Many will fall away … and because wickedness is multiplied love … will grow cold,” “When the Son of Man comes,” Jesus asks, “will he find faith on earth?” The spiritual darkening of a world without faith, where love grows cold is far more catastrophic than a physical darkening of sun and moon and falling stars. How can we avoid roads where the bridge is out, where faith is lost and love grows cold? Two ways.

First, Jesus commands us, “Watch at all times, praying that you may have strength to escape all these things that will take place, and to stand before the Son of Man,” St. Augustine writes that we do not know what to pray for, and so the Lord taught us the Our Father. But here Jesus not only teaches us something to pray for, but commands it: Watch and pray at all times — that is every day—for strength to endure and escape all these things that will take place, so that you may stand—not fall prostrate in fear like a fallen star—but stand with joy before Christ the King when he comes in his glory. Make this a daily prayer for the gift of perseverance, for strength to bear all that is to happen in your life, so that you may not be shaken and darkened and fall prostrate in fear, but stand radiant with joy when Christ the King comes. 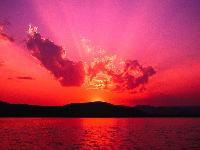 Second, the Patriarch Joseph, as a Christ figure, commanded his brothers to bring their youngest brother with them when they came back again. He solemnly warned them, “You shall not see my face unless your brother is with you,” We cannot stand alone. If we want the joy of seeing the face of Christ, we must bring our brother and sister with us. By drawing our family, our friends, and even our enemies with us, by turning many to righteousness, to Christ the King, we will all become radiant as stars, brighter and warmer than the sun itself for ever and ever. And that’s not a Texan exaggeration!

The Solemnity of Christ the King

Late one summer afternoon, two young men who lived in a large city were going to the movies. A good humor man whose truck had stalled was trying to get it started by getting out of the truck, pushing it and trying to steer at the same time. (A good humor is a chocolate covered ice cream bar that is attached to a stick.) Of course, he had no momentum to turn the motor. “Get in the truck and we’ll push you,” said the two. He got in, they pushed and the motor started up. They turned and started walking away. “Hold on, lads,” said the driver. He got out of the truck, opened the back door and took out two good humor bars. They were not plain. They were the most expensive he had. There were covered with coconut. The boys were astonished that he even bothered to do this. It seemed so normal for them to help him. He was in distress and they were in a position to help him. No big deal here.

In the Gospel today we are given the coming attractions of what is to take place at the end of the world. What comes across so vividly is the astonishment of those being judged at why they were being rewarded at all. The things they are being praised for seem so normal and humane that they figured they were supposed to do them in the first place. But this notion is not universal. There are others who failed to practice them. Perhaps they were on the lookout for numero uno and failed to see that a neighbor could really use some help at particular times.

The list includes many of those articles that at one time were listed under the corporal works of mercy. We show mercy to others so that God may show mercy to us. Not only is it humane but we are told that in serving others we serve Christ himself. It is Mother Teresa of Calcutta who, on seeing a leper, had in mind an expression that was inspirational. “Here is Jesus coming to me under this wretched disguise.” The unkempt, forgotten and abandoned can line up in that category. The usual suspects have great things going for them. 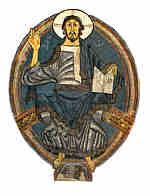 The sheep and the goats are there. But now comes the great division. The judgment is definitive. You will be able to distinguish one from another. At one time you could hardly tell one from the other as they walked down the street going to the movies. But then a time will come when surprisingly the sheep will wind up with a reward that is not just a treat sprinkled with coconut.

To see God as he is in himself, to see Jesus in his regal and divine majesty! The articles of faith of the Catholic Church cannot be dismissed lightly.