At the Cistercian Studies Conference recently at Kalamazoo, Rozanne Elder
gave a paper on St. Bernard which had this phrase in the title, “Macula Nigra.”
Macula Nigra is translated “black spot” I thought it might have something to do
with St. Bernard and Astronomy, but no, the words refer to an apparition a
lay brother had of St. Bernard not long after Bernard’s death. He appeared to
this lay brother bright and shining, as you would expect a saint to be but he
had a black spot on his chest. When asked about it Bernard said the spot
represented his erroneous teaching on the mystery of the Immaculate Conception of
Mary. Bernard’s teaching lacked precision on this point. There was a popular
movement at the time to have a feast in honor of the Immaculate Conception. But
Bernard said no! He was wrong. It later became a dogma of the faith.
The feast we celebrate today — Corpus Christi—came about because of a similar apparition.

We are told a Belgian nun in the 13th Century had an apparition of
a large white host-but there was a blemish in the host—a dark spot. The sister
was told it represented the absence of a special feast in honor of the Body
of Christ in the Eucharist. Thus, we now have the Feast of Corpus Christi.
These two feasts are a good example of how the faith of the people establishes
the law of belief. These two feasts are for the people. Being moderns we are prone to ask, did these apparitions really take place? But I think the more important question is to ask is what do they mean? It seems to me they mean that no single person or no single period of time possesses the full truth. The full revelation of Christ in God is ever expanding—it is inexhaustible. We come to a fuller understanding and knowledge by becoming
aware of what we don’t possess. Thus, the dark spot in the apparition really is a
symbol for all human knowledge. If we search it out we come to know through
personal experience that we all bear this spot—call it the mark of Cain or
Original Sin. It is this emptiness—this absence-this pull toward non—existence—to
sin that we all experience. This is the root of our anxiety too. Anxiety is
described as the state of mind in which we become aware of nothing—nullity. Fear
of death is a classic example. It is imprinted right into our bodies-our
instinct—the instinctual fear of going out of existence. 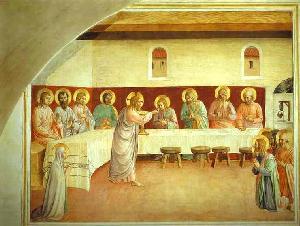 Some theologians believe that even if there was no Original Sin we would
still die, but our death would not be the fearful thing it is. It would be more of
a beautiful handing over of our life into God. It would be based on our image
of God that we bear in our soul. The life of the Trinity where the Father
pours out His life to the Son and the Son returns his life to the Father thought
the Spirit. Our death would thus be a form of prayer.
This is what our Eucharist is all about. It is called a blood covenant. But
that doesn’t mean much to us-just as a black spot doesn’t—we have to ask what
it means—blood is a powerful-a realistic image of our life—our life blood.
People faint at the sight of blood. It is terrifying. Jesus poured out his life’s
blood for us just as he pours out his life to the Father in the Trinity.
Today’s feast of the Body and Blood of Jesus celebrated His victory over
death-His passing through death—handing over his body and pouring out his
blood-surrendering His life to the Father that our death may be just that very thing-a
surrender into God. Giving up our most precious gift our life itself. The
nullity of death that hangs over our heads is redeemed.
Today’s feast focuses our vision. We look at the host and see our redemption.
We make a leap of faith—just as we will do in death. We know in this Host
there is a presence just as we know in our death there will be a presence. As the
second reading summarizes it ” . . . . The Blood of Christ offered to God
through the eternal spirit will purify our conscience from dead action so we can
worship the living God.”