The Solemnity of St. Joseph 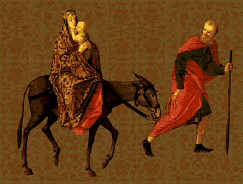 While traveling on public transport in a large city, on a street car, bus or elevated train, how many have overheard the statement of one passenger to another, “I never knew what problems were until I was married“? The marital state is a quantum leap from the single state. One assumes the responsibility of supporting and raising a family. One no longer has the freedom of looking out for ways to spend the weekend doing just what you have in mind. You have to be on the lookout for others and how you can help to foster family life.

Today we celebrate the solemnity of St. Joseph, husband of Mary. From the word go in his marriage the problems started. His wife was with child and he could only wonder who was the father. His stable life was interrupted when he became a stranger in a foreign land. Instead of living where he wanted to live, his geographical location was altered. His stability was finally assured but his modest occupation was never an assurance of wealth. He had to work as best he could in obscurity and possibly remoteness from relatives.

Today the evidence is mounting and piling up. Both mother and father are employed in trying to raise a family. Single parents try to govern a household. The prospect of job security is no longer guaranteed. For one reason or another, a marriage seems to unravel. It is a continuation of the passage from the Acts of the Apostles, “Through trials and tribulations we come to the kingdom of God,” .