The Solemnity of the Birth of St. John the Baptist

Solemnity of the Birth of St. John the Baptist

At a meeting of Cistercian men and women several years ago, I and about twenty others were invited to form a circle and share with the group the memory of an encounter with a person in whom Jesus became real for us. The people comprising this circle were in their forties and fifties — all but one monk who was in his late seventies, and some were privately expressing misgivings about this monk’s presence at the meeting. They were wondering if a monk so old and with such a different formation than ours, would be able to really “enter into the circle”.

Well, the old monk’s turn to share finally came and with some apprehension we all listened as he related how one day while he was serving as porter a woman came to the gate house inquiring where she might purchase some monastery bread, and he described how, as he greeted the woman, he felt himself at once overshadowed by the most indescribable joy and serenity, because, as he told us, “everything about her seemed just right”. And having been in her presence just a short time, he began to feel that everything with himself, and with God, and with the world was — just right. Something about this woman — made everything seem just right.

Over the next several years, the old monk met the woman again from time to time and learned of a singular tragedy that had occurred in her life, and with which she was coping with a quiet and courageous faith. They never exactly became friends. It could not even be said they were well acquainted with each other. It is doubtful the woman ever had any inkling of all that was awakened inside this monk every time she said “good morning.” Even so, the old man, his voice quiet with amazement, said in conclusion: “That woman, her goodness, her quiet strength, her beauty, taught me more about the mystery of Jesus Christ than any book I ever read, or any sermon, or class I ever heard in the course of my entire monastic life.” And with that — he was finished.

The room became very quiet, and after several moments, it was evident That none of us knew what to say. Finally someone spoke up and said: “Brother — I just personally want to thank you so much for sharing that beautiful experience; and I wonder if the lesson we might gain from it is that it was by your years of adherence to a strict ascetical discipline; your perseverance in prayer, in sacrifice, and service to the brethren, that eventually bore fruit in the grace, by which Jesus showed you the real beauty of a woman as a person.” A second person spoke up and enthusiastically endorsed this view. A third person spoke and affirmed the opinion of the second speaker. All around the circle people relaxed. We were talking again. And then someone raised his hand and addressing himself to the person who spoke first said: “Excuse me but — I thought what I heard brother say was not that Jesus Christ revealed to him the beauty of a woman, but that the beauty of a woman revealed to him the mystery of Jesus Christ. All around the circle, eyes were directed at the old monk who nodded and said: “Yeah — yeah, that’s how it was.” And the circle got very quiet again. 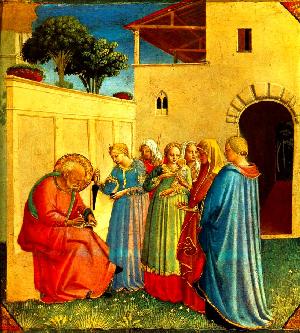 There is an old Protestant hymn whose refrain goes: “May the circle be unbroken — by and by Lord by and by . . .” And I wonder why is it, do you suppose, that we Cistercians when we meet, so often arrange ourselves in a circle? I’ve been told this seating arrangement is meant to facilitate interpersonal sharing and my experience is that it does. But, sitting in a circle also provides a form of protection for us. It is a seating arrangement that helps us feel shielded and strengthened against what is outside our group, and alien to our way of thinking. When a line of covered wagons encounters Indians, it draws itself into a circle, which, while it facilitates relations between cowboys, does little to promote understanding between cowboys and Indians. Football players huddling around in a circle are generally not discussing how they may grow in empathy toward their brothers on the other team. They are discussing how to defeat them, and the circle they form together leaves no doubt in anyone’s mind who is on what team.

This morning’s gospel relates that, at the news Elizabeth had given birth to a son, all of her family and friends gathered and formed a circle around her for the purpose of circumcising the child and “rejoicing with her“. But, they did more than that. They decided, (the gospel is explicit on this point), Elizabeth’s friends and relatives decided that her newborn child would be named “Zechariah“, after his father, and again, everyone rejoiced.

And so imagine the awkward silence that follows when Elizabeth’s small voice is heard addressing the circle, and she says: “No— no, the child’s name will be John”. After a brief silence, someone in the group reminds Elizabeth this does not conform to the customary thinking of her people. There is no one in her family named John. But Elizabeth is undeterred, and no one knows what to say next. The circle has been broken. Now, it so happens that Elizabeth is a woman, and so an attempt is made to resolve the awkward moment by simply ignoring her and addressing the matter to her husband, who astonishes the group by writing on a tablet: “The child’s name is John.”

The people forming this circle around Elizabeth are good people; faithful Jews and lovers of God, but, at this moment in history, God is about to reveal a mystery that has never so much as entered their mind or heart. God is about to speak a new word, and something about this circle they have formed together is making it hard for Elizabeth’s friends to hear that word 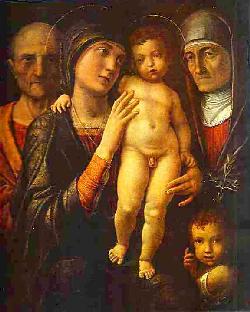 The old monk who was invited to share his experience in the circle, caught us a little off guard when he identified a revelation of Jesus Christ with his experience of a beautiful woman. As we in the circle listened to him, Jesus became very real for us and through Jesus God the Father, drew very close to us. And maybe for a moment, Jesus and his Father were just a little too real, and just a little too close. And I wonder if something like that isn’t happening in today’s gospel.

Elizabeth is revealing to her circle of friends a truth whose expression is quite personal, and quite particular to herself, which catches them a little off guard. But it was not realistic, after all, for Elizabeth’s friends to imagine that she should be completely identified with the group. Elizabeth is not a group, she is an individual, and she has just given birth to a child who Jesus will say is, up to that time, the greatest individual ever born of a woman. Her friends are gradually realizing that something has happened; an individual has appeared in their midst whom it is not going to be easy to incorporate into their circle, and they begin to wonder out loud: “Who will this individual be?” As it turns out, he will be that individual who announces to the world that God — has been born an individual — born of a woman.

In a way, what we’re celebrating on this feast of the birth of John the Baptist, is the incarnation of our Lord. It is with the birth of this singular individual John that there begins the revelation of a mystery realized in the birth of another individual – who is God become flesh. My prayer on this feast of John the Baptist is that we Cistercians, in our vigorous and sometimes facile indictment of “individualism”, will be able to hear and make room in our circle for that wise and very individual old monk who may some day speak to us a word of God, and who may be for us a new John the Baptist, bringing God nearer to us than He ever was before and drawing us beyond our circle, into the wider circle of God’s infinitely creative embrace.