The Third Sunday of Advent at Mississippi Abbey

Forgetfulness! A few days ago when I went to brush my teeth I took my hand towel and put it on the sink. Then I went back for my toothbrush and cup. Looking down at the hook where I hang the towel, I noticed it was gone. “Darn,” I thought, “who took my towel, why would someone do that?” Annoyed, I went to get a new one wishing I could catch the person who took it. I put it on the hook, grabbed my cup and toothbrush, went over to the sink and saw my towel right where I had put it. I thought to myself, “I’m going mad.” I felt like the woman who went to a psychiatrist and said, “I’m so forgetful, I can hardly remember anything.” He replied, “How long has this been going on?” She said, “How long has what been going on?”

Forgetfulness! To appreciate the coming of Christ, the grace in which we live, Advent reminds us of what it was like to live in darkness, in an unredeemed world, without a Savior, until the cry of John the Baptist announced that he was near. The Book of Wisdom describes those days like this: “… when the night in its swift course was now half-gone, thy all-powerful word leapt from heaven … into the midst of a doomed land,” . What was it like to live in a doomed land without a Savior? 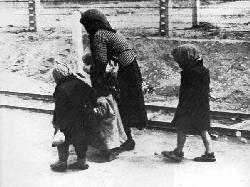 At the memorial museum in Dachau’s concentration camp there is a heart breaking photograph of a Jewish mother walking with her young children to the gas chambers. She knows they are going to an untimely death with no one to save them, and she’s powerless to stop the tragedy. In desperation she performs the only act of love left to her. She bends over and places her warm hands like a little blanket over the eyes of the child walking in front of her, so that at least one of her children will not see the horror ahead. The author of the Book of Ecclesiastes, living in a doomed land, practically sinks into despair saying, “Behold, the tears of the oppressed, and they had no one to comfort them! The dead are more fortunate than the living, but better than both is one who has never been, who has not seen the evil deeds that are done under the sun,” . How hard it was to live without Christ! That’s only half of what Advent is about. The other half is to remember what it was like to live in a doomed land and suddenly hear that salvation is near?

On Wednesday evening, July 24th, of last year, 240 feet beneath the beautiful landscape of Somerset County, coal miners were operating a grinding machine with a hundred steel teeth on a revolving cylinder to chew into the wall of coal. Suddenly the wall split open and a torrent of 50 million gallons of water shot into the tunnels. The miners fled for their lives but the explosion of water rolled passed them, cutting off any escape. The men entered tunnels only four feet tall, barely able to keep their heads above water until they reached an air pocket with dry ground about 18 feet wide and 30 feet long. The water stopped rising but how long could they survive shivering in their soaked clothes? By the light of their helmets they wrote notes to their loved ones, convinced they were going to die. But near midnight three days later rescue workers succeeded in drilling an escape shaft into a nearby tunnel. A microphone and speaker was lowered through the shaft. Then the miners heard a voice cry out in the darkness announcing that rescue was at hand. Suddenly everything in their doomed land changed in favor of life. One of the men said he has only cried for joy twice in his lifetime: first, when his son was born, and second, when he heard the voice of his rescuers.

When the voice of John the Baptist cried out in the wilderness that the Lord was coming, everything in our doomed world suddenly changed in favor of eternal life. God’s all powerful word leapt down from heaven to save us from sin and to make us sharers in his own divine life, a life that physical death can never take away. At about the same time as the Jewish mother and her young children went to death at Dachau without hope of rescue, St. Maximilian Kolbe willingly accepted an untimely death at Auschwitz by taking the place of a fellow prisoner condemned to die in reprisal for someone who had escaped. He had no fear, he lived in hope of eternal life.

To die at all is a dreadful fate, timely or untimely. It’s hard not to be afraid of it. Can anyone, other than the saints, approach death with the tranquillity and happiness of Fr. Kolbe? Saint Gertrude the Great, a mystic in 13th century Saxony, received comforting assurance from Christ concerning the moment of death. He said to her, “When I behold anyone in agony who has thought of me with pleasure, or performed any works deserving reward, I appear at the moment of death with a countenance so full of love and mercy that the sinner will repent from the heart for ever offending me, and will be saved.“1 Gerard Manley Hopkins was so encouraged by this promise that he put it in verse, writing: “To him who ever thought with love of me, or ever did for my sake some good deed, I will appear looking such charity and kind compassion at his life’s last need, that he will out of hand and heartily, repent he sinned, and all his sins be freed.“2

The Lord did not come into our doomed land to save us from untimely deaths or to prolong our lives a few more years. Our need and his rescue is far greater. He takes all the harm out of death. Christ will be like a tender mother walking with us. At the right moment he will lift the veil covering our eyes to let us see the joy that is coming, and he will fill us with such happiness by his loving countenance that we will run to him and be swept up in his arms. For the children of God “the day of death is when two worlds meet with a kiss: this world going out with the future world coming in.“3 The message of Advent is this: remember the doomed land from which we have come, the good news in which we live, and the hope to which we are called.