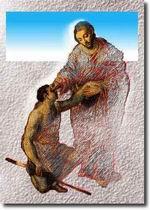 What would we do without a friend? Someone who is not a member of the family or a relative. Someone who just might have different notions or opinions on things that really matter in our life. Even though the advice need not be followed, there are no hard feelings. Especially when it comes to a state of life that is rather permanent. The passage from the single state to the married state, from civilian life to the military life or even the religious life. Even here advice might not be sought. Consider the case of the young man who does not want anyone to know aout his position because he does not want someone to try to talk him out of it.

In the Gospel today, a blind man had a definite plan in mind. If there was anyone in the crowd who was his friend and agreed with him, apparently he remained silent. The crowd had other thing in mind. In the presence of a popular and busy healer and teacher there seemed no time for someone of little prominence to interrupt his passage. Yet he ignored them and plowed onward. He knew what he wanted and he knew Jesus could help him. His persistence placed him on the right track. Jesus asked him: “What would you have me do for you?” As though Jesus did not know. The blind man’s inward desire only grew more emblazoned until it reached the form of outward expression for anyone to hear. Waiting all those years to live a normal life would be worth the effort of a formal request.

In another place of the Gospel Jesus told us: “I shall not call you servants any more because a servant does not know his master’s business. I call you friends because I have made known to you everything I have learned from my Father.” He is someone in whom we can confide. He knows what is on our mind and a presentation of our inmost thoughts to him will not go unnoticed. However the situation is resolved, at least we have a way of letting him know just where we stand. As the Author and Finisher of our faith, whatever Jesus has accomplished in us can be brought to perfection by his powerful grace. If he is going to stand at the door and knock we can be assured that it is not just a salesman trying to unload washing machines or vacuum cleaners. What Jesus has learned from his Father could only give light and brighten our own horizon.

Maximus the Confessor develops one of his treatises on the spiritual life in the form of a dialogue between an elder and a young monk. In a familiar pattern the young monk comes to the elder with a question. He wants to know the reason for the Incarnation. The elder replies by saying that the Son of God became a human being in order to show us how to please God by keeping his commandments. The young monk is discouraged, because there are so many commandments that he can’t remember them all. Basing his answer on this morning’s gospel the elder replies that all of the commandments are summed up in one commandment: we are to love God with all our heart and all our soul and all our mind, and to love our neighbor as ourselves. The young monk is still at a loss, since he sees so many tendencies within himself that are contrary to love.

I can easily sympathize with Maximus’ young monk. Jesus’ answer to the scribe in this morning’s gospel is deceptively simple. All we have to do is to love God with all our being and everyone else as ourselves! However, Jesus did not just give us words to put into practice and let it go at that. Jesus’ purpose was both to show us how to love and to enable us to love. Love is not something that we can decide to do on our own. Love is a response to love. If I have not experienced love, I cannot know how to love. If this is true of human love, how much more true is it when we are to love as God loves? Jesus Christ in his words and in his works is the revelation of God’s love for us and of human love for God.

God loved us so much that he became one of us. He accepted our limitations, our sufferings and ultimately death for our sakes. God’s love for us manifested in Jesus Christ calls for our response, and Jesus Christ is also the manifestation of that response. Jesus demonstrated his love for his Father in his total dedication to doing the will of his Father in the face of misunderstanding, rejection and ultimately his passion and crucifixion. Can any of us imitate this love? Certainly not on our own. But as St. Paul reminded the Thessalonians the gospel is not simply a matter of words; it comes to us in the power of the Holy Spirit. The imitation of Christ is much more than an external copying of behavior. We love as Christ loved by putting on the mind of Christ. Uniting our spirits with Christ’s Spirit we can love as Christ loved here and now in our own situations.

We need not be discouraged when we see how often we fall short of loving as Christ loved. To love God with all our being and to love each other as ourselves is our goal, not our present reality. Jesus Christ has also manifested God’s love in patience and forgiveness. Love is both our goal and the means to our goal. We learn to love by loving. Supported by faith and encouraged by hope let us grow into the full stature of Christ’s love by following Christ and living according to his words and his example day by day.