The Twenty-Seventh Sunday in Ordinary Time

Marriage is a way of life that always intrigued Fr. Pius, who was a monk of New Melleray for 67 years. One day, he asked me, “Stephen, have you ever considered holy matrimony?” I thought about it for a moment and then decided to tease him, but only half joking: “You know, Fr. Pius, since I came to the monastery I don’t think I have considered holy matrimony more than three or four times a day.” With a twinkle in his eye and a smile on his lips he replied, “And have you made up your mind yet?” “No,” I said, “I’m waiting to see what you will do.”

Marriage is a way of life that Jesus held in the highest esteem. He taught us God’s plan for humanity from the beginning of creation: we are created male and female, to become one flesh, to live in a loving partnership of the whole of life with another human person. But after creation there was a terrible fall. God’s plan for our happiness clashed with human desires to be autonomous, a law unto ourselves. Conflict with God expanded to conflict with one another. Self-centeredness can turn marriage into a painful relationship.

Once there was a traveling salesman who was often away from home and family. When his wife went to the hospital to give birth to another lovely child he rushed back to be with her and collapsed into an easy chair by her bedside. A nurse came in and asked, “Are you feeling okay?” “Yes,” he replied, “I’m fine now.” She looked at him sprawled out in the chair and said, “I was talking to your wife, not you.” Some months later his wife complained that they never had time to do things together, and he was becoming a stranger to the family. Struck to the heart he said, “Look, I’m really sorry. We could have a week’s vacation right now. Let’s take the three kids and go anywhere you like.” At that, she burst out crying. Completely dismayed by her reaction he asked, “What did I say wrong now?” She replied, “We have four kids not three.”

The original happiness intended by God when a man and woman become one flesh as husband and wife generates heartache if either partner is preoccupied with pleasing self, or caught up in a struggle for dominance, or fighting over money. The sorrow will be greater if one of them is unfaithful. An attorney taking a deposition asked his client, “What was the first thing your husband said to you when he woke up?” “He said, ‘Cathy, where am I?’ ” “Why did that upset you so much?” She replied, “Because my name is Susan.”

In the time of Jesus there were two schools of thought about what constituted grounds for divorce. The stricter school of Rabbi Shammai allowed divorced only for adultery. The lenient school of Rabbi Hillel allowed divorce for the slightest reason, simply by writing a decree saying “I release and divorce my wife this day” . The teaching of Jesus astonished them: “Whoever divorces and marries another commits adultery, what God has joined together no human being must separate.” Christian marriage is not only a human union. It is also a sacramental union formed by God, as beautiful, intimate and wonderful as Christ’s union with the Church.

Jesus was on his last journey to Jerusalem to be crucified when he taught that the marriage covenant is an exclusive, permanent, life-long commitment. The indissolubility of marriage is a hard saying but cannot compare to the suffering Jesus endured for our sakes. Christian discipleship is often costly, a sharing in the way of the cross. It would be wonderful if all couples could be like those in automobile advertisements: physically attractive, best friends, awesome lovers, blissful parents of two obedient children, owners of a devoted dog and of the newest car on the market. Couples whose marriage involves suffering, inadequacy, and flaws are not failures—they are partners in a fallen world who share in the sufferings of Christ, weathering storms that few escape. They are learning to love and be happy without being perfect. Still, some marriages are invalid from the beginning. 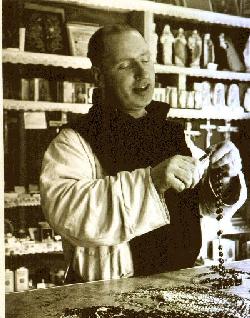 The conditions and consent needed for a valid sacramental marriage go far beyond what is needed for a civil marriage. If the intention to form a life long commitment, with complete fidelity, and openness to children, is lacking, or if one partner does not have enough maturity to form a partnership of the whole of life, their marriage is invalid. Separation will not be divorce and an annulment will confirm there was no sacramental union. But what happens when a valid marriage falls apart?

The struggle to follow Christ is not easy. He never rejects us when we fall short and turn to him for compassion and forgiveness. In his eyes we are all children whom he loves, like the woman caught in adultery, or the Samaritan who had five husbands, or Peter who denied him three times, or the apostles who deserted him. Christ wants to receive us in his embrace and bless us. Sometimes it is hard to be married, but it is also hard not to be married. And it’s not easy to be a monk either. As Fr. Pius said to me one day, “I’m happy to have persevered as a monk. But, I’m glad I don’t have to do it over again.” Let us be of good courage when we walk along the way of the cross because in the end we will share Christ’s resurrection. This is what we are celebrating in the Eucharist, today.