Homily for the Third Sunday of Advent at Mississippi Abbey

In Chicago’s O’Hare Airport we used to hear this message over and over: “The Department of Homeland Security has raised the advisory level to ORANGE!” It was ORANGE for so many years that people became complacent and it was replaced in 2011 by alerts that are more detailed and imminent. I wondered what level ORANGE really meant and what the other levels were, so I googled them. The lowest level was GREEN, it meant everything is fine. Don’t worry. The next level was BLUE, watch out, keep an eye on strangers acting suspiciously. Then came YELLOW. You would see more airport police walking around, and you should report unattended packages and luggage. At level ORANGE there was high risk of a terrorist attack, so security tightened,  checking in took longer, and you had the feeling that everyone was watching you.  Finally, the highest level was RED, a severe risk, so go to confession, update your will, and if you’re crazy enough to travel, well, good luck!  Since 9/11 the advisory level was never GREEN or BLUE; most of the time it was ORANGE for domestic flights, and RED for international flights.  If people took it seriously, what could they to do? 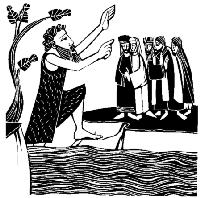 That’s what people were asking when word went ’round that John the Baptist had raised the Messianic advisory level to RED. He said, “One mightier than I is coming … The winnowing fan is in his hand … to gather the wheat into his barn, but the chaff he will burn with unquenchable fire.” For the wheat, level RED meant REJOICE, because the imminent coming of Christ is good news for those whom he will gather into his barn.  But for the chaff, RED meant REPENT, because there’s real danger of falling into unquenchable fire! So the tax collectors and soldiers asked John, “What should we do?” He replied, “Share your goods, stop collecting more than what is prescribed, do not falsely accuse anyone, and be satisfied with your wages.” These are ordinary deeds of justice and mercy, nothing very hard or difficult. And yet, many people didn’t do anything because complacency in our habits of sin is much easier.  So, what does it take to overcome such complacency? 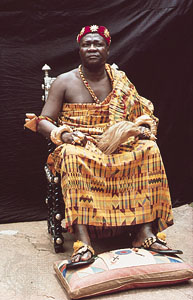 An African from Uganda told this story.1 My uncle, the chief, was sitting among his people in court one day when a man came and bowed in the African way. He had come with eight cows which he left some twenty yards away. He said, “I have come for a purpose, sir.  The chief replied, What are those cows for? Sir, they are yours. What do you mean they are mine? They are yours. When I was looking after your cattle, I stole four cows and now they are eight, and I am returning them to you.  Who arrested you? Jesus arrested me, sir. Here are your cows.”  There was no laughter, only a shocked silence. My uncle could see this man was at peace with himself.  The man said, “You may put me in prison or beat me but I am free. Jesus came my way and now I am free.” The chief replied, “Well, if Jesus has done that for you, who am I to put you in prison? You may go home.” A few days later, having heard the news, I went to see my uncle. I said to him, “Uncle, I hear you got eight cows!” He said, “Yes, it’s true.” I replied, “You must be happy.” He said, “No! Since that man came, I can’t sleep. If I want the peace he has, I must return a hundred cows!” The chief was himself a thief. But the sincere repentance of that lesser thief shattered his complacency, and the chief’s nephew said it inspired him, too. 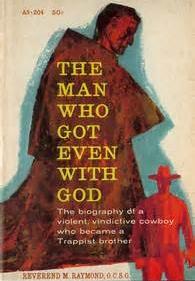 St. Augustine’s Confessions; Augustine was inspired to overcome his lust by St. Paul’s letter to the Romans; and St. Paul was shaken out of his complacency by encountering Christ himself. I was inspired by the good example of my parents, and by reading the life of “The Man Who God Even with God,” Br. Joachim Hanning, the first Trappist Lay Brother at Gethsemani. When we hear a warning, we often look to see what others are doing before we decide to act.

In the story of the tax collectors and soldiers who came to John for baptism, I wonder who inspired them.  There was someone among them who was the first to come forward and be baptized by John, someone whose identity has been lost in time, perhaps a notable sinner whose example of repentance shattered the complacency of others. Certainly, your lives are an inspiration to others, and I think all of us can name someone whose example inspired us to move out of our complacency, so now, when we hear that, “The Department of Heavenly Security has raised the advisory level to RED,” we know it means the kingdom of God is near at hand, it’s time to Rejoice!

Homily for the Third Sunday of Advent at Mississippi Abbey 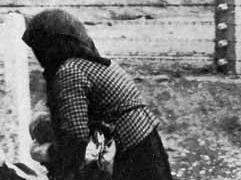 Sometimes in life everything suddenly changes for better or for worse, like coming face to face with an untimely death and no hope of rescue.  At the memorial museum in Dachau’s concentration camp there’s a heartbreaking photograph of a mother with her four children walking towards the gas chamber. She knows they are in mortal danger but she’s powerless to stop the tragedy. In desperation she performs the only act of love left to her. She bends over and gently places her warm hands like a little blanket over the eyes of a young child walking in front of her, preventing at least one of her children from seeing the tragedy that is ahead. People coming to the museum are riveted by this photo of a Jewish mother and her children on the day they died. Untimely death without hope of rescue is a dreadful thing.  On 9/11 it happened in the horrifying collapse of the Twin Towers.  Last month it happened when 44 Argentinian sailors were trapped and died in their disabled submarine.  But Advent marks the moment in history when everything suddenly changed for the better, in favor of life.  It was the day when John the Baptist first announced the coming of the Messiah.

It was like the moment when nine coal miners first heard they would be rescued.  Fifteen years ago, 240 feet below the beautiful landscape of Somerset County in Pennsylvania, they were operating a grinding machine with a hundred steel teeth on a revolving cylinder chewing into a seam of coal. Suddenly the wall broke open and a torrent of water shot into the tunnels. The miners fled for their lives but the explosion of water rolled passed them, cutting off any escape. The men were barely able to keep their heads above water until they found a large air pocket in a higher tunnel. Rescue workers on the surface used global positioning satellites to find the right spot for drilling a six inch air pipe. Eight hours after the breech they succeeded. The air pipe went right into the tunnel of the trapped miners who responded by striking the metal pipe nine times, one for each man. But they were trapped. By the light of their helmets they wrote notes to their loved ones and put them in a sealed container expecting to die.  As the hours passed they turned off their helmet lamps to conserve power and waited quietly in the darkness, shivering in their soaked clothes, and praying.  It took three days for a rescue shaft to be drilled into their tunnel next to the air pipe.  Near midnight a probe with a microphone and a speaker was lowered through the larger shaft. Then the miners heard a voice cry out in the darkness announcing that their rescue was at hand. Suddenly everything changed in favor of life. One of the men said he has only cried for joy twice in his lifetime: first, the day his son was born, and second, the day he was rescued.

When the voice of John the Baptist cried out in the wilderness that the Messiah was coming, everything suddenly changed in favor of eternal life for a doomed world.  Now we know that the meaning of an untimely death without hope of rescue is not the tragic end of everything; it is really an earlier beginning of eternal life and happiness.

But still, it’s hard for us not to be afraid of dying, whether timely or untimely. However, Saint Gertrude the Great, a mystic in the 13th-century, received a comforting assurance from Christ concerning the moment of our deaths.  He said to her, “When I behold anyone in agony who has thought of me with pleasure, or performed any works deserving reward, I appear at the moment of death with a countenance so full of love and mercy that the sinner will repent from the heart for ever offending me, and will be saved.” 1 A poet,Gerard Manley Hopkins, was so encouraged by this promise that he rephrased it in verse as follows: “To him who ever thought with love of me, or ever did for my sake some good deed, I will appear looking such charity, and kind compassion at his life’s last need, that he will out of hand and heartily, repent he sinned, and from all his sins be freed.” 2 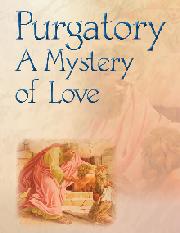 The Lord did not come to save us from untimely deaths or to prolong our old age a few more years. Our need and his rescue is much greater. Jesus makes death itself the birthday of eternal life.  At the right moment he will lift the little blanket of mortality covering our eyes to let us see the joy that is coming, and he will fill us with such happiness by his loving countenance that we will run to him, leaving our mortal remains and our sins behind.  For the children of God, “the day of death is when two worlds meet with a kiss: this world going out and the future world coming in.” 3  If you ask, “What about purgatory?”  Well, that’s the subject for another homily.  For now, remember this, the second happiest people in the universe, after those in heaven, are those in purgatory, for they know that they are saved, like the nine miners waiting their turn to be lifted up the rescue shaft into the arms of their family and friends. 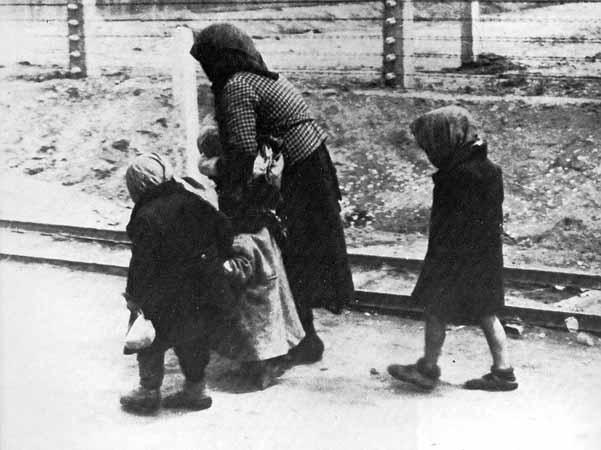