Homily for the Thirteenth Sunday in Ordinary Time

Our expectations often govern the way we react.  Jesus was not expected to do anything exceptional because he was only a carpenter, not a famous rabbi like Gamaliel. Nor one of the great teachers like the gentle Pharisee Hillel or his colleague, the severe Shammai, who presided over the Sanhedrin together. Jesus didn’t grow up in one of the great cities like Jerusalem, Tiberias or Caesarea. He was only a kid from a side street in Nazareth, one of Galilee’s poorest towns, merely a manual laborer like the rest of them, a common craftsman in wood and stone. No one expected him to say or do anything worth noting, so when he said the child is not dead but sleeping, they laughed at him.

Not only that, even his own neighbors, people he grew up with, will mock Jesus by calling him the son of Mary, Barmiriam.  It was a name they gave not to honor but to belittle him. It was the Jewish custom to identify someone as the son of his father, not of his mother. Simon Barjona means Simon, son of John. Even when the father was deceased, the son was still called by his name, not by his mother’s. Unless, perhaps, people knew that Jesus was not the son of Joseph. People who grow old together in small hamlets and little rural villages have long memories. Did they, like Joseph, notice that Mary was pregnant when she returned from her three months visit with Elizabeth? Did they sense his distress? Were their tongues wagging then as they were wagging now? “He’s the son of Mary.” When King Saul lashed out to insult his son Jonathan during an argument about his friend, David, the King dishonored Jonathan by calling him “the son of an iniquitous and rebellious woman!” Jesus was the son of Mary. His neighbors were sure of that. And only that. What good could come from such a child?

How many hometown kids dream dreams of greatness only to be laughed at by their own kith and kin? No one believed the Wright brothers would get their flying machine off the ground, including their father who was a minister. He said, “If God wanted people to fly he would have given them wings.” The brothers left their home and workshop in Dayton, Ohio, and went to North Carolina in pursuit of their dream. Lawrence Welk dreamed of music. He worked hard on his father’s farm to earn enough money to buy his first accordion. When he did no one paid any attention to him, much less any money for his music. Failing to get an audience in his hometown, he decided to go on the road. His father said, “You won’t last six weeks.” But the Hotsy Totsy Boys of the 1920’s became the Champagne Music Makers on the Lawrence Welk Show who were still popular fifty years later. Beethoven’s teacher labeled him hopeless as a composer. Einstein was described as mentally slow, unsociable and adrift in foolish dreams. Louisa May Alcott’s family wanted her to stop writing foolish children’s stories and find decent work as a seamstress or house-servant. Young Walt Disney was fired by a newspaper editor who complained he lacked creative ideas. And after Fred Astaire’s first screen test the director’s comments were, “Can’t act, slightly bald, can dance a little.” Each of these neighborhood kids had extraordinary gifts and went on to greatness. But the story of Jesus is not like one of these. 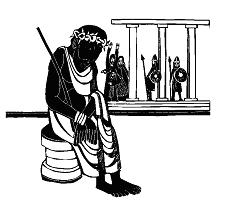 He did not go on to greatness but to crucifixion. The people who laughed at Jesus will later be the people who shouted for his crucifixion.  The life of Jesus is about love crucified. In the Brothers Karamazov, Dostoevsky describes an encounter between a woman of little faith and the holy monk, Father Zosima. She suffers from doubts about the existence of God. Father Zosima tells her that the more she succeeds in loving, the more convinced she will be of the existence of God and the immortality of her soul. She dreams of giving up all she has and becoming a sister of mercy, but she says, “I wouldn’t be able to handle ingratitude from those I serve.” Father Zosima replies, “Love found in dreams thirsts for immediate action, quickly performed, with everyone watching. Such love will even sacrifice one’s life provided it does not take too long and everyone is looking on and praising you. No,” he says, “real love perseveres in the harsh and dreadful.” When we receive nothing in return but ingratitude and are treated shamefully then our stories will be more like that of Jesus and we will experience the love that gives without return. There is a foreshadowing of the Last Judgment in every mockery of Christ. For it is not God who rejects the sinner, but the sinner who rejects God. The way we respond to love crucified, the way we persevere with him through all that is harsh and dreadful will be our happiness at the Last Judgment. And then we will see what mighty things God does in heaven for those who love him.

Homily for the Thirteenth Sunday in Ordinary Time

We don’t often pause to mull over those times we have experienced rejection.  We don’t put them on our résumé.  “Thank you very much for your application, but we don’t think you are qualified for this position.  Thank you for your manuscript, but it is not something we would care to publish at this time.”  Nor the times we have been attracted to someone who then decides we no longer “qualify” for their interest or attention.  These are not just casual experiences.  Something very deep in ourselves is at stake:  our sense of worth.  Are we worthy?  This is more than a question of having knowledge or skills.  Our self-acceptance hinges on the worth another sees in us.  Our self- reception is laid bare in the reception we receive. 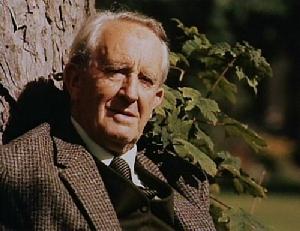 We come to know more about ourselves in those times of non-reception and rejection than we do in times when we are unquestioned and are sailing along.  These experiences seem to plunge us into layers of self-awareness that we had not expected.  The disillusionments, disappointments, failures and losses reveal what we had been desiring, what was at work in our hearts.  They have a great formative potential, if we can receive them, accept them, and own them. Tolkien had one of his characters say:  “His grief he will not deny, but it will not darken his heart.  It will teach him wisdom.”  A potential for sensitivity, awareness, and compassion can be born in these dark experiences.

It is easier and safer to cut our losses.  Not to go back to the scene of the crime.  To avoid all occasions of hurt or pain.  To become cautious and calculating about how and where we invest ourselves. We seek to convince ourselves of our worth through competitiveness, aggression, or withdrawal.  It is easier and safer to construct walls which eliminate any threats to this sense of worth we have constructed for ourselves.  One definition of neurosis is “unaccepted and unintegrated pain.”  It becomes the wall that demands fortification, but never healing. It doesn’t allow us to pass into the pain so that we can pass through it.

To “find our self” means punching some holes in those walls.  It is to welcome and accept the whole of our self, to step outside those boundaries of self-reflection and mirrors that would save us from losing ourselves.  This is to carry one’s cross: to live the whole of a life which is not intimidated by suffering or pain, which no longer needs the illusion of constant gratification or numbing satisfaction.  It is to endure suffering with hope and love. It will not deny sorrow or grief.  It knows that these are woven into the fabric of human life.  It is the capacity to be disappointed by life and let it pass, the wisdom not to be deceived by life.  It is preferring a deeper love to the protection of one’s own intactness or safety. 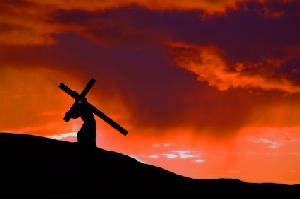 Our natural loves (parents, family, and children) and our intentional loves teach us about this love of God which has its own imperatives and impulse.  It is the love of God manifest in the cross that can heal and redeem the inevitable pain and suffering of human life.  It is the worth we find and discover in ourselves when we bear the burdens and sufferings of real love. What might have seemed futile is now experienced as worthwhile.  The love of God is there to be received by hearts that can now see what they never saw before.  The simplest and most immediate of experiences (giving a cup of water, preparing a meal, letting someone cut in front of us) can become transparent signs of sharing in a cosmic communion in which all things are sacred.  Our inner experience can slowly be transformed and changed in a way that gives us the eyes and heart to receive God in his manifold appearances.  Because we bear the word of God within, we can hear and receive the prophet who discloses the will of God.  Our own hunger and thirst for justice makes space in the world for those who seek to disrupt and overcome the enslaving powers that control our world.  The disciple, the learner, the little one who seemed so little worthy of our attention and care is now a companion who disarms and dismantles our weapons of defense.  We are invited to accept the learning and wisdom that committed love and identification with Christ and his cross bring to transform our lives.  Our one desire is to be worthy of Christ.  The one disaster is not to be worthy of Him.