Thursday in the First Week of Advent 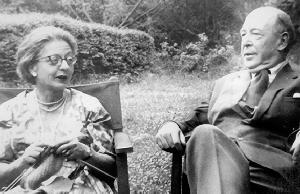 In his book titled A Grief Observed, C.S. Lewis writes about the great storm that hit him when his wife died of cancer. He experienced a loneliness the likes of which he had never known. He tried to reason that he was happy before he married Joy Davidman, and that he could be happy again. But then a memory would flash through his mind and the flood of pain would almost bring his house down in despair.

It was in this time of grief that C. S. Lewis was supported by those inner graces of faith, hope and love that he had been building with for so many years. He writes: “You never know how much you really believe … until it becomes a matter of life or death to you. I realized that if my house had collapsed with this one mighty blow, it was indeed a house of cards.” C. S. Lewis endured the floods of pain and winds of despair because he had built his house not on the sand of self-centered love but on the rock of love for Christ.  We can live with pain in this life when our house is built on Christ who promises us eternal happiness, and who teaches us how to offer our sufferings to help others.