Triumph of the Holy Cross

The title of today's feast is surely a paradox. Reflect a moment: one of the ugliest mechanisms for bringing about a person's death is crucifixion, to be nailed and hung on a cross. But you and I have come to church this morning to celebrate the “triumph of the cross”. What exactly is the cause of our celebration this morning? If this mystery: the “triumph of the cross” was something we could see, what might that look like?

At our monastery in Conyers Georgia where I lived in the 1980s, there was in residence a Bro. Louis Galletti who was quite old when I met him, and had endured the hardship of the Trappist lay brother life for more than forty years, but he always seemed to be smiling. Louis was especially beloved by retreatants because at Mass each and every morning when it came time for the sign of peace, Louis would turn toward the guest section and, as a sign of encouragement, would clasp his hands high over his head with a gesture that looked a lot like an Olympian athlete crossing the finish line in first place. Louis had lived monastic life under the old regime, which was no picnic, had lost a leg to cancer in the late seventies, and yet seems to have persevered through all of this with an irrepressible joy. But Louis was not in fact always smiling. 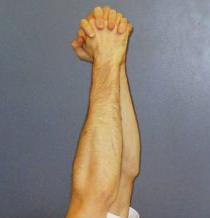 One night, following Compline, after all the monks had gone to bed, I heard a man scream, and after a few moments, I heard him scream again, and again and again, at pretty regular, one minute intervals. Rising from bed, and going in search of the source of the commotion, I ended up in the infirmary where, entering the common room, I was surprised to find Brother Louis, sitting on a stool. He had removed his artificial leg, which was leaning against the wall and he looked quite relaxed, just sitting there reading the evening paper, when suddenly he screamed . . . and then just went on reading the paper. Like many people who have a limb amputated, Louis was afflicted by phantom pains, especially at night, when they came at regular intervals; each wringing from him an anguished cry, but not so anguished a cry as to deny him his enjoyment of the evening paper which he seemed to be absorbed in, undistracted by the mayhem that had awakened me from a sound sleep. For a moment or two I stood staring at him, wondering exactly what I was looking at. Was it the triumph of the cross I was looking at?

Hans Urs Von Balthasar has suggested that Christianity, as a religion, stands or falls on one truth; one great truth which contains in itself all truths. If this were not the case, Christianity would be like a house to which people were continually adding a new wing, or new porch, or second story. But Christianity claims to announce to the world God's own self-proclamation; God's final, complete, and definitive introduction of Himself to the world in Jesus Christ. But if we believe this claim, it means, (to borrow an expression of St. Anselm) that, the Christian proclamation, being God's own self-proclamation, is that religious truth than which no greater or truer revelation could ever be proclaimed. If the Christian message could be improved upon by a new religious insight or by some evolutionary process, then it would have never been the absolute self proclamation of the absolute God. But, can a proclamation of God and Truth this absolute be proclaimed by erring sinners like you and I? Why not? Christ, himself, has been lifted up, promising that all who have faith in him will likewise be lifted up. But how are we to be lifted up? In the same way Christ was? How was Christ lifted up? He was lifted up like a snake. That is what the bible says. That is what we are told in today's gospel: “Just as Moses lifted up the snake in the desert, so the Son of Man must be lifted up.” Again, St. Paul says, Christ became sin, so that sinners like you and I might be granted a share in the divine life of Father, Son, and Holy Spirit. 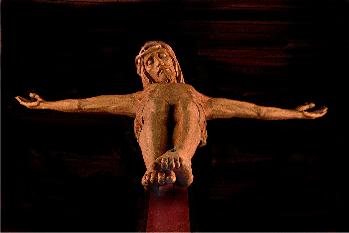 This, brothers and sisters, is the great truth on which our religions stands or falls; the truth that contains and brings to fulfillment all truths. It is this truth that is the cause of our celebration today. But, if the triumph of the cross is to be our triumph; if our human proclamation of this truth is to be that proclamation than which no greater religious truth could possibly be proclaimed, then, like Jesus, we must ourselves be lifted up and by no other means than crucifixion on the cross by which he secured our salvation. Maybe what Brother Louis Galletti gave us a glimpse of was the astonishing and very humble way in which the triumph of the cross, the stupendous mystery itself, can peek through the crack of a monk's very human pain to show us the glory of God radiant in all its original splendor.