Tuesday in the Fourth Week of Easter

Homily for Tuesday in the Fourth Week of Easter

How long are you going to keep us in suspense? If you are the Christ, tell us plainly.  Jesus answered them, I told you and you do not believe.  Jesus seems to be saying that all they need is right in front of them.  It is a lack of faith, not a lack of evidence that leaves them in suspense.

Not everyone can read and understand the evidence.  A good mystery story will include all kinds of clues that become apparent only when the culprit is unmasked.  Doctors have varying abilities to make a diagnosis of an ailment.  Some will miss the signs.  It takes an inner sensitivity, a taste, a feel that gives the ability to understand what the evidence provides.  Accumulating more evidence can just complicate matters and muffle the inner congruity that is needed to hear and see beneath the surface. 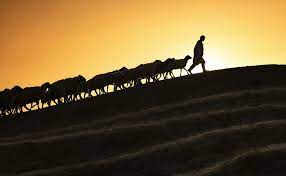 A common theme in John’s Gospel is that of testimony.  John the Baptist give testimony and witness to Christ.  The Father gives testimony to the Son. In today’s Gospel, the works of Jesus testify to him.  We often think of testimony as a second-hand substitute for real knowledge and evidence.  We have to take someone else’s word for it, but it would have been better to see it for ourselves.  But John uses the word testimony to indicate knowledge that can be obtained in no other way.  It is a knowing that calls for assent to the person giving testimony.  The only way to come into this knowledge is by yielding our very self to the one who is revealing himself.  What is said, the one who says it, and the one who hears it are inseparable. They are one.  Jesus is not saying three things when he says: My sheep hear my voice.  I know them and they follow me. I give them eternal life.  It is all one.  Without the testimony, the inner knowledge (belief) cannot come to life or being.  Faith comes from hearing.  A connaturality comes alive that you didn’t know you possessed.  I give them eternal life – now.  To hear his voice is to become one of his sheep.

The Jews who questioned Jesus may have felt that he didn’t answer their question and went off in some mystifying monologue to avoid a direct answer. But he was opening for them a contemplative horizon which revealed the immediacy of the Father who becomes transparent in entrusting the gift of life to the hands of his Son.  The Father and I are one.  The evidence he offers is the new and eternal life given to those who believe in his word.