Tuesday in the Fourth Week of Lent

Homily for Tuesday in the Fourth Week of Lent 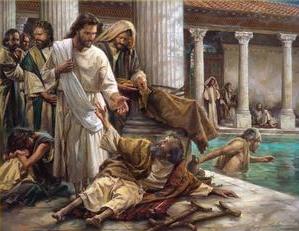 “Do you want to be healed?”  Why did Jesus single out this person for healing?  A large number of ill, blind, lame and crippled people were around the pool.  What attracted Jesus to this one?  Perhaps it was because he never gave up.  He had been ill for thirty-eight years. But he kept hope alive in his heart. He wasn’t able to be the first one into the pool by himself, but year after year he waited and hoped that someone would help him.  And Jesus did.  Perhaps Jesus singled out this man to teach us never to give up hope, either for ourselves or for others.  As old Br. Peter said so succinctly when Dom Andre Louf asked him for a word of wisdom, “Never give up!”