Tuesday in the Second Week of Easter 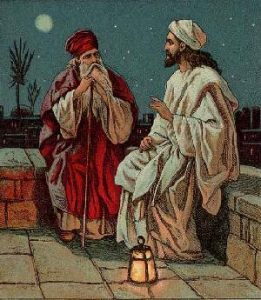 Nicodemus, a leading Pharisee, met Jesus under the cover of darkness, the outer darkness symbolizing his interior darkness and confusion. Just as others love the cover of night because their deeds are evil, so Nicodemus came by night to cover his meeting with Jesus, as if it also was an evil deed. He began with curiosity about the signs Jesus performed. He ended the evening with admiration of Jesus’ teaching: about being born again, and about the heart of God making the most difficult Lover’s choice, to let his beloved Son be lifted up on a cross, like Moses lifted up the serpent in the wilderness, to save his people.

Perhaps it was daybreak when an enlightened Nicodemus left Jesus. The next time we see him, Nicodemus is at a meeting of the chief priests and Pharisees. He is no longer hiding in darkness. He openly urges the council not to judge Jesus without first giving him a hearing (Jn 7:51). The night visitor became a daylight defender. In this, he represents all Christians who are called to be apostolic, that is witnesses to Jesus Christ in the world.