Tuesday in the Second Week of Lent

Homily for Tuesday in the Second Week of Lent 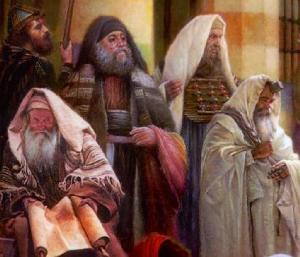 Pharisees started out as fervent Jews reacting against persecution. They dedicated themselves to obeying every rule out of a burning devotion to God.  It was a good beginning.  But over time the dedication of many Pharisees shifted away from God to pride in their good behavior.

Not only Jesus, but even the Jewish Talmud pokes fun at their pride by describing seven kinds of Pharisees. The Shoulder Pharisee who wore good deeds on his shoulder to be seen. The Wait-a-little Pharisee who always had excuses for lagging behind in his practices. The Bruised Pharisee who shut his eyes lest he accidentally look upon a woman on the street, so he bumped into walls and pillars. The Hump-backed Pharisee who was so humble he walked hunched over, and because he dragged his feet he tripped on small obstructions. The Accounting Pharisee who liked to add up his good deeds. The Fearful Pharisee who kept cleaning the outside of the cup to appear good and avoid judgment. And finally, the God-fearing Pharisee who really and truly loved God more than self, and delighted in obeying his law.

I would like to have the fervor of these God-fearing Pharisees who began well and persevered in love.  But I fall so often, like all the other kinds of Pharisees. May God forgive our failings and lead us to live in true humility entirely dependent on God’s mercy.