Tuesday in the Seventh Week of Ordinary Time

Homily for Tuesday in the Seventh Week of Ordinary Time 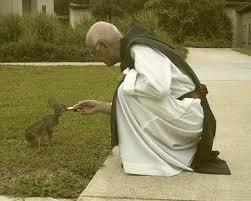 What does Jesus so love about children that he presents them as role models for his disciples?  Is it their innocence?  We’re attracted by the simplicity and innocence of children who are incapable of serious moral evil.  Once a little boy who had been disciplined by his mother wanted to do the worst thing he could think of.  So, he said, “I’m going to go out and talk to strangers!”

But in today’s Gospel Jesus wasn’t teaching his disciples about innocence, although that is very desirable.  He was teaching them about being servants of one another.  In Aramaic child also means servant. Children had to serve, they were given work to do. The child in Jesus’ arms was probably waiting on Jesus and his disciples, washing their feet and bringing them food and drink.

It is a beautiful grace to be like the children Jesus loves, who serve others.  Mother Teresa said it well:   “Give your hands to serve and your hearts to love.”