Tuesday in the Twenty-Fourth Week of Ordinary Time

Homily for Tuesday in the Twenty-Fourth Week of Ordinary Time 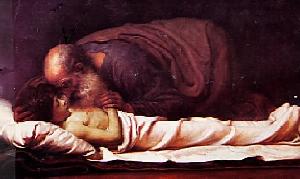 In the gospel of St. Luke, Jesus walks in the footsteps of the great prophet, Elisha, but with even greater power and authority.  Just as Elisha raised a boy to life in a village at the foot of Mt. Tabor,1 so also Jesus raises the only son of a widow in the village of Nain a few miles away.  But what Elisha did with difficulty, stretching himself over the dead child three times and praying all the while, Jesus does with a single command, “Young man, I tell you arise.”

And when someone brought twenty barley loaves to Elisha asking how they could possibly feed a hundred men he said, “Give it to them. They shall eat and there shall be some left over.” 2  But Jesus multiplies five loaves of bread to feed five thousand men, with twelve baskets left over. 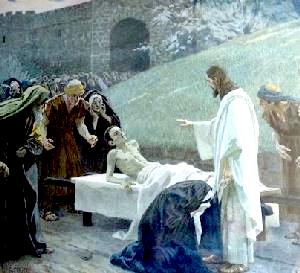 And when Naaman the leper came to Elisha to be healed, he was told to wash seven times in the Jordan River.3  While ten lepers who cried out to Jesus for mercy were healed all at once simply at his word.

No wonder people exclaimed, “A great prophet has arisen among us, and God has visited his people!”  But these mighty deeds of Jesus which exceeded all that the prophets had ever done, were only a foreshadowing of even greater acts yet to come of which we are the beneficiaries: first, feeding the entire world every day with the bread of his body and the wine of his blood; second, healing people everywhere and throughout all time from the leprosy of their sins by a single immersion in the waters of Baptism.  And third, he promises to raise us up, not one or two people, but all of us, and not just to a longer life on earth, but to eternal life.  With St. John Chrysostom we can say, “Oh, how blessed we are!  Jesus is with us, we have nothing to fear.”