A college girl said to her boyfriend: “Tell me, Shawn, do you think I’m too aggressive? I want a straight answer, and I want it now.”  In today’s Gospel Jesus encounters a pushy, aggressive mother who wanted a favorable answer right now. When in trouble that’s the kind of person we need on our side.

A news service reported this true story about just such a mother in Vancouver, Canada. Her child was in deep trouble, trapped at the bottom of a storm sewer. She grabbed the first person passing by for help and he happened to be a police officer. But he rudely shook her off and continued on his way without saying a word. Feeling her aggression kick into high gear, she followed him and hollered for help. The officer stopped and looked at her tugging at the cuff of his trousers with her mouth.  He was about to shake her off when she let go and headed for the storm sewer. Now you should know that this mother was one of the many ducks that feed in the park. The officer followed her to the iron grate. Looking down he saw a young duckling struggling to jump up the concrete wall. He lifted the grate and gently scooped the little chick out of the drain, setting her down safe and sound. Thanks to an aggressive, very persistent mother, the two ducks waddled off with their desires fulfilled. 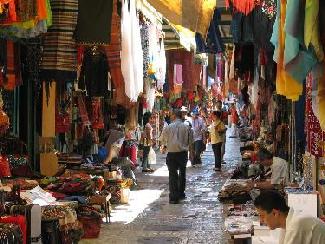 Why was Jesus so rude, so cold and resistant like the officer to this mother’s request? When I was a student in Jerusalem, I saw cultural differences of people in the Middle East that helped me understand what Jesus was doing. It happened when another student and I were shopping among the store fronts on a narrow cobblestone street in the Arab section of the Old City. My companion wanted to buy a used brief case that he saw in one of the shops. He asked what it cost, but the price was way too high, so we left. When we were a short distance away, the shopkeeper called us back, offering a lower price. My friend said, “No, it’s still too high.” They haggled some more. Finally, they agreed on a price that was 70% lower. After paying for the used brief case, my friend said, “I bet it cost him less than half what I paid.” The shopkeeper replied, “It did not! I found it on the street.”  Haggling is normal human conduct in the Middle East. The shopkeeper wants to make the sale, but the culture expects him to overprice his goods so the customer can argue for a better deal and go away pleased, and his fellow shopkeepers can admire him for his skill in making a profitable exchange.

The encounter of Jesus with the Canaanite mother also had its cultural protocol. Jesus wants to heal the child, but unattended women were not permitted to speak with men who were strangers. Watch how astutely she manages her aggressive persistence without alienating her potential benefactor. She approaches Jesus, not discreetly but shouting loudly for attention. That should have defeated her purpose then and there, but she 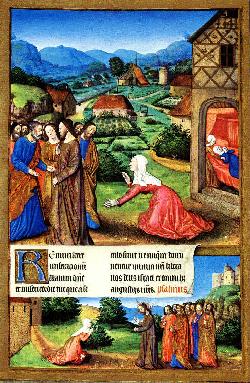 addresses Jesus as, “Lord, Son of David.”  Her act of faith redeems her audacity. But Jesus, as custom requires, ignores her. So, she begins hounding the apostles like an obnoxious wild dog looking for food. Her persistence demands a response. But Jesus, knowing that she’s a foreigner, replies that he was sent only to the lost sheep of Israel.

Now, with the driving force of a mother’s love, she becomes more persistent by getting in his way, kneeling right in front of him, almost tugging at his robe. She pleads, “Lord, help me.”  Jesus replies, “It’s not right to throw children’s food to the dogs.” His words are not as harsh as they sound to us, because he didn’t use the word for wild dogs, but the word for little dogs who are affectionate, lovable, household pets. This haggling back and forth now reaches its astonishing climax. She says: “Yes, Lord, but even the little dogs eat the scraps that fall from their master’s table.” She wanted a straight answer—she wanted it now—and she received it.  Jesus is delighted with her response and cries out for all to hear: “Woman, great is your faith! Let it be done for you as you wish.” The desires of mother and daughter are fulfilled, and those of Jesus, too. She wins his highest praise. Hers was not little faith, like that of the apostles, but great faith. She will not be least in the Kingdom of heaven! So, when you pray for something be of great faith, and be persistent, even aggressive! 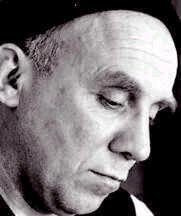 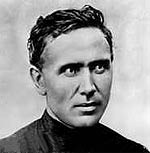 Blessed Damian de Veuster spent his life helping lepers on the Pacific island of Molokai in the 19th century. When he first arrived on the beach of the leper colony, the faces gazing at him were terribly disfigured. They were abandoned and left to die. Father Damien said he would not have been able to bear the hardships in the leper colony if it had not been for the Real Presence of Christ in the tabernacle of the small chapel he constructed.2 On the feast of Corpus Christi the procession with the Blessed Sacrament was always slow and laborious, because the limbs of so many lepers were weak and deformed, but now more than ever they wanted to adore the Lord who gave himself as the bread of eternal life. “No one should eat this flesh without first adoring it.” 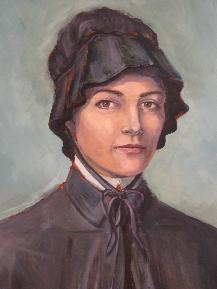 St. Elizabeth Ann Seton was drawn to Catholicism by her love of Christ in the Eucharist. One day before her conversion after the death of her husband from tuberculosis when Elizabeth was only twenty-nine years old, she walked into a Catholic Church in Italy. When the Eucharist was elevated after the consecration, a disbelieving tourist leaned toward her and said in a rude whisper, “This is what they call the Real Presence.” She writes, “My heart trembled with shame and sorrow for his unfeeling interruption …” She turned away and bowed down in tears thinking of the words of St. Paul, “They do not discern the Lord’s Body.” She didn’t know how the Body of Christ could be there. “But,” she writes, “how did God breathe my soul in me, and how was my God a little babe in the first stage of his mortal existence in Mary … and how a hundred other things I know nothing about.” She continues, “[Catholics] believe they possess God in this Sacrament, and that he remains in their churches and is carried to them when they are sick. My God! How happy I would be … if I could find you in church as they do, how many things I would say to you about the sorrows of my heart and the sins of my life.” Then one day when she saw the Blessed Sacrament being carried in procession, she suddenly believed and adored: “I fell on my knees … when the Blessed Sacrament passed by, and I cried to God to bless me … my whole soul desired only Him.“3 “No one should eat this flesh without first adoring it.”

We do it six times during every Mass when the Eucharist is lifted up for our acts of faith and adoration. Twice at the consecration, when the Body of Christ is lifted up, and then the cup of his Blood. The third time is at the Final Doxology when we proclaim our faith together with the great “Amen.” The fourth time is when the Eucharist is lifted up and we confess unworthiness to receive Christ under our roof and we ask to be healed. The last two times are at communion when we express our belief and adoration first that this is truly His Body and then that this is truly His Blood we are receiving. “No one should eat this flesh without first adoring it.”The presence of Christ in the Eucharist responds to our hunger for love and our desire to adore. We want to see, to touch, to taste, and to feel intimacy with Jesus, with our God. There is nothing nicer than that. 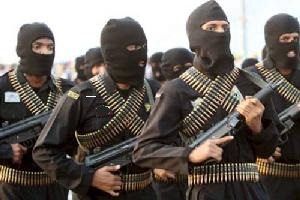 Imagine that a dozen terrorists carrying automatic weapons suddenly enter our church this morning. One of them points a weapon at Fr. Xavier’s head and orders him to publicly deny Jesus Christ or be shot. Fr. Xavier begins to tremble and his face turns pale. For a moment he doesn’t reply, both because he is afraid and because he is praying for courage to profess his faith. Then he speaks from the depths of his heart in a loud and clear voice: “I believe in Jesus Christ, the Son of God, who died on a cross to save me.”

Hearing this profession of faith the terrorist in anger pulls the trigger and the noise of his weapon explodes throughout the church. Next, he points his weapon at someone else and repeats his demand. Another terrorist does the same to you saying, “Deny Jesus Christ or I will kill you.”  What will you do? Every Sunday we say the Apostles Creed together; we proclaim our faith in Jesus before each other. Will you and I be strong enough to profess our faith before a terrorist?

Jesus warned us that we will suffer times of division and great persecution.  When he was on the Mount of Olives overlooking Jerusalem, before he entered the city to be crucified, he said, “You will be delivered up to tribulation and be put to death and hated for my name’s sake. And because wickedness is multiplied most people’s love will grow cold. But whoever perseveres to the end will be saved” (Lk. 24:9-13).

That is a scary prophecy: “Most people’s love will grow cold!”  Do you have relatives or friends whose love has grown cold?  By ourselves, none of us are strong enough to persevere in faith and love, or to be martyrs like Fr. Maximilian Kolbe whose feast day is today.  He was a Polish priest who took the 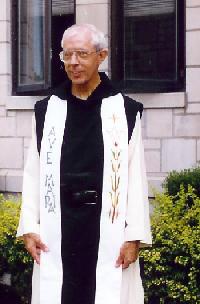 place of another prisoner condemned to die by starvation, not in a muddy cistern like Jeremiah, but in a locked bunker within the concentration camp of Auschwitz.  Martyrdom is beyond our human strength.  Only God can give us the grace to persevere and to die for our faith.  Jesus urges us to pray for this grace.  In the gospel of Luke he says: “Great distress shall come upon the earth … Watch at all times, praying that you may have the strength to escape all these things and to stand before the Son of man” (Lk. 21:23, 36).  In the celebration of today’s Eucharist I pray that all of us will receive the grace of perseverance. It is a gift God gives not to our imagination when we tremble at the thought of being killed for our beliefs.  Rather, it is a gift God gives to strengthen our wills when we are actually faced with martyrdom.

Tomorrow we will celebrate Mary’s Assumption into heaven, and we will lift up our eyes to the goal of our lives. We are citizens of heaven, sharers in God’s own divine nature.  “Our slight momentary afflictions are preparing for us an eternal weight of glory beyond all comparison” (2 Cor 4:17).  That is worth dying for.  Jesus loves us and gives us his body and blood under the form of bread and wine so that we will be more like him.  Let us also pray every day for ourselves and for our families and friends that we may all have the strength to die for Jesus, even by martyrdom.