When Jesus told the story of the Prodigal Son he was on his way to Jerusalem for the last time to be crucified. As he walks along the road he tells his disciples, not about God’s wrath, but about God’s love for us.  For all of us are like one or the other brother, and sometimes both.

The younger son represents those whose sins are obvious.  Discontented, he was anxious to leave his father’s farm, to get away, to do whatever he pleased. So, he did. After squandering his inheritance, ironically, he ends up working on a farm again, but this time perishing with hunger.  Finally, he says “I will arise and go to my father and say, Father I have sinned against heaven and against you. I am no longer worthy to be called your son.  Treat me as one of your hired servants.”  How many of us are as honest about our sinfulness as this boy? 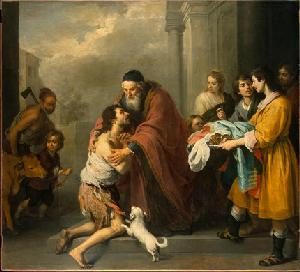 The prodigal’s father yearns for the return of his boy.  Every day he scans the distant horizon, hoping his lost child will come home.  When at last he sees the boy coming down the road, he runs to him, throws his arms around him, and kisses him tenderly. He doesn’t even let the boy finish his confession before lavishing forgiveness upon him. He was so overwhelmed with happiness he threw a party to celebrate.

The older son represents those whose sins are less obvious, like the Scribes and Pharisees who stand at a distance and murmur with anger like many of us.  This brother looks good on the outside, hardworking, reliable, obedient, but inside he is burning with anger at his father and his brother. As Mark Twain said, he is “A very good man in the worst sense of the word.” Jealous of his portion of the inheritance, he is not about to share it with a prodigal who squandered his portion.  He never considered the possibility that his brother is repentant. When his father begs him to join the celebration, he replies, “You never even gave me a kid goat to celebrate with my friends.”  One wonders if he had any real friends.  He won’t even say, “Father” or “My brother.” It’s easy to forgive someone who is really sorry, like the prodigal son, but what do you say to those who stubbornly hold on to anger?

Then Jesus reveals his Father’s compassion for all his children, even the Scribes and Pharisees.  With great tenderness the father in this parable does more than simply say to the older boy, “My son.”  Instead he uses a term of endearment, saying, “My child, you are always with me and all that is mine is yours.” The parable ends here, without telling us if the older brother has a change of heart and joins the celebration because, like the parable, we don’t yet know the end of our own stories.

The reality Jesus is revealing as he walks toward his crucifixion is greater than even this beautiful parable because Jesus is our brother too, the most important one of all, our eldest brother, the First Born from all eternity.  When we left our Father’s house and squandered our divine inheritance, the Son of God, our eldest brother, was deeply saddened to see us fall away.  He grieved with his Father, sharing the same love, the same longing for our return. Unlike the older brother in the parable who was glad to be rid of that younger brat, the Son of God, our eldest brother, wanted to go in search of us. So, his Father sent him into this distant land where Christ was born and began 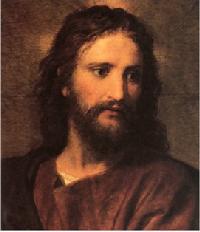 telling us about our Father and how he sent his Son to give his life for us even by crucifixion. Our journey to the heavenly Jerusalem is also a way of the cross. We come home empty handed, but Jesus, our eldest brother, to whom the Father says, “All that I have is yours,” lets us share in everything he has, his own divine inheritance.  Oh, what a loving Brother and Father we have!

Who are we?  We are the stiff-necked people of Israel who wandered in the desert. We are the persecutor Saul, surprised by grace.  We are the woman at the well giving a cold cup of water to Jesus and receiving living water in return.  We are Mary Magdalen washing Jesus’ feet with our tears as he washes our souls with his mercy.  We are the lost sheep he came to seek. We are the wounded stranger on the roadside healed by holy oils. We are the thief on the cross to whom Jesus promised heaven that day. We are the sinful Peter whose tears wore grooves in his cheeks, and whose tongue never ceased repeating, “You know that I love you.” We are the adulterous woman whom Jesus did not condemn.  We are the younger son who lived riotously, repented, and was kissed tenderly by his father. We are also the older son so full of murmuring and anger, for whom Jesus was willing to die. We are the lost whom Jesus came to find and save. Our stories will also end in a great celebration with our oldest brother who loves us just like our heavenly Father does, and who shares himself with us in this Eucharist and in the heavenly banquet that will last forever.