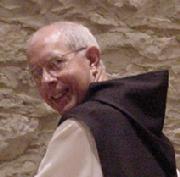 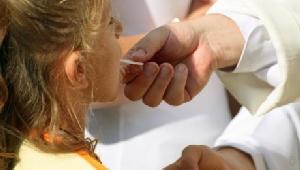 How can anyone so young experience such a love for Christ? Where did it come from? It came from the love put into her heart by God the Father at Baptism. Theologian Fr. Edward Schillebeeckx describes Baptism as a desire for the Eucharist.2 In Baptism God the Father enters our hearts and draws us to love his Son as he loves him, fulfilling the prayer of Jesus at the Last Supper, “May the love with which you loved me be in them and I in them,” (Jn 17:26). That is why a five year old girl, responding to the movement of God’s Love in her heart, can experience such a desire and love for Christ.

Thomas Merton writes, “When we receive the sacred Host it is not only because we have a desire to receive him, but also and above all because Christ, in this Sacrament, desires to give himself to us.“3  St. Ambrose expresses it this way: “Have you come to the altar? It is the Lord Jesus who calls you … saying, ‘Let her kiss me with the kiss of her mouth.‘” 4 Not even persecution and torture can overcome the love for Jesus that the Father gives us.

An early American Jesuit martyr, St. Jean de Brébeuf, suffered an excruciating martyrdom. The Iroquois Indians tied him to a post and baptized him by pouring scalding water over his head and body. Yet he didn’t say a single word against them. Instead, he prayed that they might have the gift of faith. To silence his prayers a burning torch was pushed into his mouth. After he died they were so filled with admiration of his bravery that they cut out his heart and drank his blood hoping to imbibe his tremendous courage.5 But it is not from drinking the blood of martyrs that such courage comes. It comes from receiving Christ in the Eucharist. 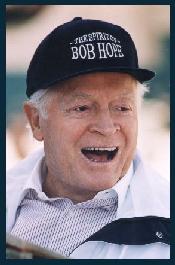 Today, medical science makes use of blood transfusions to save lives. For example, Bob Hope, spent half of his one hundred years, from World War Two to Desert Storm, giving joy and even donating his own blood to soldiers in military camps around the world. Making fun of himself they roared with laughter when he said, “I just got a new rating from my draft board, 4Z. That means coward.” One time he amused them with this story: “I want to tell you that I’m thrilled to be here. All of you guys have been great, except for one kid who was breaking the rules, trying to go AWOL, drinking, and doing drugs. So I confronted him, ‘What’s the big idea? Why are you doing all this stuff?’ He said to me, ‘Mr. Hope, did you give a pint of blood to the Red Cross recently?’ And I said, ‘Yes.’ He replied, ‘Well, shake hands with the guy who got it.‘” A gift of blood by a donor may do good or do harm. But it can’t take away our sins, it can’t give us divine life and love.

But the Eucharist can and does. And Jesus loves us so much that even when we do not love him, Jesus still loves us.

Homily for the Twenty-First Sunday in Ordinary Time 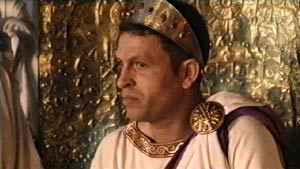 King Herod said, “Who is this about whom I hear such things?” It is the world’s most important question:“Who is Jesus?”The scribes and the Pharisees wanted to know, “Who is this man who speaks blasphemies?”  The disciples of John the Baptist asked, “Are you the one who is to come, or do we look for another?”  In the house of Simon the Pharisee, those reclining at table said to themselves, “Who is this man who even forgives sins?”  On the Sea of Galilee Jesus’ disciples said to one another, “Who is this who commands the sea and the winds and they obey him?” And Jesus Himself asks the question, “Who do people say the Son of Man is?”

A random survey on the streets in New York City asked people to answer the same question: “Who is Jesus?” Their replies are shocking for our predominately Christian country. Here are some of the responses: 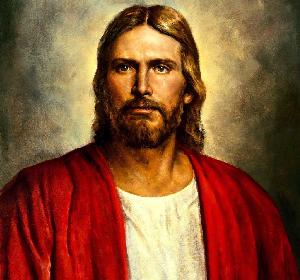 Jesus is a white guy with a beard.
He’s that blond haired dude they show in pictures.
Jesus is a story made up by someone.
Jesus is someone special, in the same way that we are all special.
He’s a man with good morals and some powerful gifts.
He’s number one.
Jesus is a Gandhi type guy.
He’s a make believe story that has been blown out of proportion.
Only one person said, “Jesus is the Son of God.”

The answer to this question is what divides 2.3 billion Christians from the next largest religion in the world, 1.6 billion Moslems, for whom Jesus is a prophet but not God.  Another billion people have no faith at all, in any religion.  There are about 900 million Hindus, 400 million Buddhists, and another 400 million Chinese who follow other traditional beliefs.  And there are only 14 million Jews.  So, the vast majority of people in this world don’t know who Jesus is.  And many who do know, act as if they didn’t.  Going by these numbers, the need for evangelization is greater now than it ever was before.

Drifting from the original question a little boy said, “He creates apples.”  When asked about Christmas many of the kids thought it was the birthday of Santa Claus.  And when a young girl was asked how the wise men were guided to the cave in Bethlehem she replied, “They used Google Maps.”

All four gospels were written to answer this question, “Who is Jesus?”  St. Peter gives the answer: “You are the Christ, the Son of the living God” (Mt. 16:16).  That is what we believe and proclaim by the way we live.  We are here this morning to be united in communion with the one whom we love, Jesus, the Son of God, and we pray every day for the billions of people in this world who do not know who Jesus is.

“Who do people say I am?” When asked “Who is Jesus?” a teenager responding to a street survey in New York city said, “He's a guy with a beard,” ” … in a long white robe.”

A heavy set man replied, “Jesus is that blond hair dude that they show on all those [holy cards].” “A youngish man, carpenter like … ”

A sceptic thought, “Jesus is just a story made up by someone …” “… that got blown out of proportion.”

An Hispanic man said, “Jesus is a friend of mine from Puerto Rico.”

A college age girl expressed her faith saying, “Jesus died for our sins so we could be saved, and in my religion we can [have sex] as much as we want, and as long as we are truly sorry we are saved.” 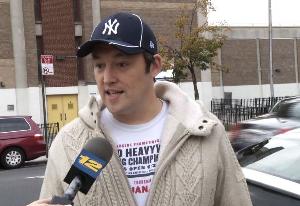 Another person said, “There's something special about Jesus, the same things that are special about me and you, and well, everybody.” “Jesus had some special gift.”

One student believed, “Jesus is a Gandhi type guy.” “A teacher like other great teachers.” “… who did good things trusting that there would be a ripple effect.” “I like him, but never met him.”

Someone else didn't think Jesus was an actual person, “More of a guideline how we should live.”

Only one person responded that, “Jesus is the Son of God, our Savior.” Good for her! She's the Simon Peter of our times and speaks for the rest of us. But I'm shocked at what so many people think about Jesus. No wonder Pope Francis is stressing that we need a new evangelization. 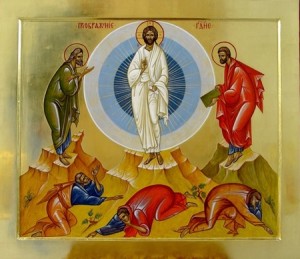 St. Matthew didn't take a street survey asking people, “Who do you say Jesus is?” But he did gather together what many said about him. The people of Nazareth said, “Is not this the carpenter's son? … and they took offense at him.” Herod declared, “This is John the Baptist, he has been raised from the dead.” Seeing Jesus walking on the waters of the lake, the disciples cried out, “It is a ghost.” A Canaanite woman addressed him as, “Lord, Son of David.” Others said he is “Elijah, or Jeremiah.” Jesus called himself, “The Son of Man.” And God the Father said, “This is my Son, the Beloved.”

“The Beloved,” that's the Father's preferred title for Jesus: “This is my Son, the Beloved, with him I am well pleased, listen to him,” (Mt 17:5). And what does Jesus tell us? He reveals that the Father loves us even as He loves his Son. Jesus said, “Father, you have loved them even as you have loved me” (Jn 17:23). We who are bruised reeds and smoldering wicks, even we can sing, “I am my Beloved's, and my Beloved is mine.” And who is our Beloved? It is, “Jesus, the Son of the Living God.” How blessed we are! How loved we are! 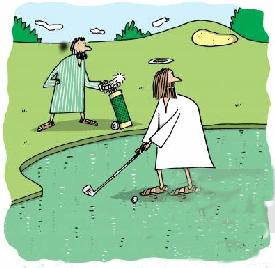 Now for a little fun! Looking down on earth, Jesus notices how many people play golf on Sundays. He decides to find out for himself what's so enjoyable about this sport and he invites Peter to come along. After a few holes they are really getting into the game when they come to a fairway where the golf ball has to clear a large pond. Jesus takes out a 7-iron but Peter says, “No, Jesus, that's not the right club.” Jesus replies, “Get behind me, Peter, I know what I'm doing.” Jesus tees off and sure enough the ball falls short, right into the water on the far side of the pond. Walking across the water to the other side Jesus considers his options and makes the ball float. Someone seeing this all says, “Look! That guy just walked on water right across the pond! Does he think he's Jesus?” Peter replies, “No, he thinks he's Tiger Woods.”