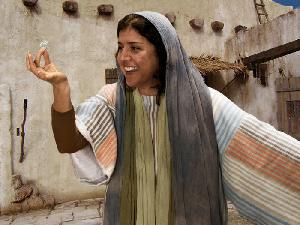 Today we have three stories in one parable. Jesus addressed it not to a crowd, but to scholars and religious leaders. On the surface it is about the lost and the found and their devoted Finder. At a deeper level, it is an illustration of the truth of the woes and beatitudes in Luke's gospel. It is occasioned by Jesus being caught in the act of finding the lost … and rejoicing over it!

A sheep, a coin, and a son are lost. Jesus, the Finder, is portrayed as a good shepherd, a good woman, and a compassionate father.

The effort-to-find is usually on the part of the searcher. The shepherd looks through the rough-terrain wilderness. The sheep, terrified at being lost, lies down helplessly and bleats. That's all it can do. And sometimes, as I recall, it has to bleat for a long time. But the shepherd comes and carries it back to the fold. The sheep does nothing more than need the help. 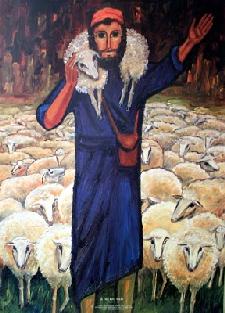 The coin, on the other hand, experiences no need for help. The need, the desire, the love that motivated the search is entirely on the part of the woman who owns it. To her, the coin had the same worth before it was lost, while it was lost, and since being found. And when she—like the shepherds—found it, those who rejoiced with her were not scholars and religious leaders, but her friends and neighbors. It was those who could empathize and identify. Sounds familiar!

The animal and the coin could not reason, they could not deliberately separate themselves from where they belonged so their minds did not get in the way of being saved. But they were sought in difficult circumstance -the wilderness and the dark- and found because they had enduring value to the seeker.

Now the area of search narrows to the relationship between a father and his son. The son can reason and is able to know better. Yet he takes his inheritance—the image of his father by which he is free—and spends the likeness by which he had known the true good: his Father's way of life. Preferring his own will, he refuses to be dependent on the father. 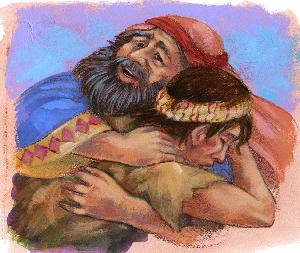 It is when the son discovers that he has squandered the likeness on false goods that he uses his freedom to return to the image of his father. It is this moment of clarity and the decision arising out of it that distinguishes him from the sheep and the coin. When he “comes to his senses” the son discovers the three essentials of repentance and conversion that make it genuine and lifelong. He recalls what it was like before he left his father. He reviews what it has been like in the “distant country,” and the effects of the “dissipated living.” The woes that Jesus proclaimed earlier were a warning against success; they had come true. What do you do with a life that you just don't cherish? He decides that he must go to his father and abandon himself to the Father's will. All he wants is to again be in the Father's presence.

Now that is a remarkable change! He left his father and spent all he had on a life of pleasure and prestige and now he only wanted to be with his father. So the second essential is: What happened? This is what happened: he felt the heat; then he saw the light. That's the way it usually works: first the heat, then the light. He discovered the beatitudes by first experiencing the woes. He discovered, “Blessed are the poor” when he found himself “in dire need.” He discovered “Blessed are the hungry” when “a severe famine hit the land and he longed to eat the pods of the swine.” He discovered “Blessed are you who weep” just before he “comes to his senses.” And he found the meaning of “Blessed are you when people hate, exclude, and insult you” when no one would satisfy his hunger. All it takes to convert a woe to a beatitude is to turn to the Father. Doing the father's will is his sole and highest good. This was his Sign of Jonah.

And when he does so, he finds the third essential: what it is like now. Life is different. There is rejoicing at his return. Family and friends identify not with his “dissolute” past, but with his newfound love for the father and his will. He will live the rest of his life in gratitude.

Perhaps the older son represents the scholars and religious leaders who are Jesus' listeners. When the older son complains of the rejoicing, claiming that his years of loyalty should merit him better treatment, he becomes like the younger son in valuing things other than the father and his will. His father tells him that being in the father's presence all along is what should be sufficient for him.

The prodigal has lived the four woes of which Jesus spoke. It was only when, in his moment of clarity, he experienced the emptiness, sorrow, hunger, and contempt of Luke's beatitudes that he could appreciate that being in the Father's presence was the fullness of life. It doesn't get any better than that.