We believe in the power of prayer, and what prayer could be more powerful than that of our Lord Jesus? But his prayer “That all may be one” has not yet been fulfilled. Christians are divided, the world is divided. The reason can’t be because of anything lacking in Christ’s prayer. So, the reason must be due to some hardness of our hearts.

Last Monday I was encouraged by a group of twenty-five students from Loras College who came to New Melleray for a conference on Lectio Divina. Their professor, Andrew Massena, was teaching them about Jewish and Christian exegisis.  He wanted to introduce them to the monastic way of reading the Bible, the way to purity of heart.

Afterwards there was time for questions.  One of the students asked me, “Why are you a Catholic?”  I had to pause and reflect, then I replied that I am a Catholic because my parents 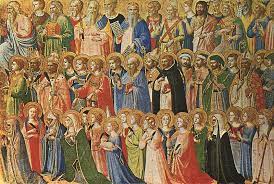 were Catholics and they raised me in the faith.  I remain a Catholic especially because of my love for Christ in the Eucharist.

Then, I said that if Christianity didn’t exist, if Christ had never come, I would want to be a Jew, because they have the Word of God, the Hebrew Bible, and everytime we memorize the Words of God and let them bubble up in our hearts we experience union with God, a real communion.

Christianity, the apex of Judaism, gives us communion under both forms, as the Body and Blood of Christ in the Eucharist and as the Word of God dwelling in our hearts. That’s why we pray during this octave for Christian Unity for the whole world to become one in faith and love in the Catholic Church, the Mystical Body of Christ.