Votive Mass of Mary, Health of the Sick

Homily for Votive Mass of Mary, Health of the Sick

Today we honor the Blessed Virgin Mary under the title, “Health of the Sick.”  Do you remember how the little child, St. Therese, was so sick she almost died?  But then a statue of the Blessed Virgin in her room smiled at her, and Therese was instantly cured.  Even today Mary continues to work miracles of 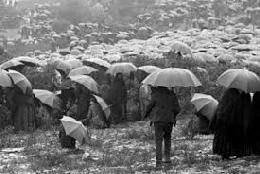 healing at her shrines like Lourdes and Fatima.  Who can count the number of hospitals that have been named after Mary?  The first hospital in the new world was established five hundred years ago by the Spanish Conquistador, Cortes, in the City of Mexico.  He called it the “Hospital of the Immaculate Conception.”

But it is primarily our eternal health and salvation that Mary desires.  In one ancient litany Mary is called the “Hospital of Sinners.”  So, at the end of each Hail Mary we say, “Pray for us sinners, now and at the hour of our death.”

Today is the 101st anniversary of Mary’s last appearance at Fatima when she fulfilled her promise of a great miracle by the “Dance of the Sun” seen by over 70,000 people.  It had been raining and their clothes were wet, but then the clouds split open and the

sun begin to spin in a pinwheel motion, with brilliant colors spreading out in all directions.  It seemed to zigzag across the sky and plunge toward the Earth.  After ten minutes the miracle was over and their clothes were dry.

This great sign in the heavens was given to heal souls, as Mary said, “Amend your lives, ask pardon for your sins and no longer offend Our Lord, Who is already so much offended.”  She asked us to, “Pray and make sacrifices for sinners, for many souls go to hell because there is no one to make sacrifices for them.”  Prayer and penance, we can all do that!