Homily for a Votive Mass of Mary, Pillar of Faith 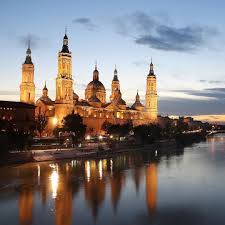 The story of Mary as the Pillar of Faith is about her very first apparition. Tradition tells us that around the year 40 A.D. St. James the Apostle was tired and dispirited, sitting on the bank of a river in Spain. The people were not open to the Gospel, and he was ready to give up. But Mary, who was still living in Palestine, appeared to him on a pillar of stone. She assured him that the people of Hispania would become Christians and that their faith would be as strong as the pillar on which she stood. In honor of this apparition St. James built the very first Marian shrine, remembered today by the magnificent Cathedral of Mary, Pillar of Faith, in Zaragoza, Spain.

From that first apparition onwards Mary has been a pillar of faith who is always ready to help us. For example, there’s an icon1 of Mary in which she’s brandishing a club to save a small boy from the clutches of the devil. The boy, filled with a surplus of energy, had been driving his mother crazy. In a moment of exasperation, she exclaimed, “Oh, let the devil take you!” To her horror, the devil appeared, set on doing just that. She cried out to the Madonna, “Save 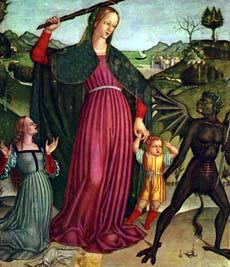 my little boy!” Mary came and clobbered the devil over the head with a club driving him away. The child ran to hide under Mary’s mantle, who then gave the boy to his mother saying, “Fear not, my children, for I shall never abandon you.”

Mary is a pillar of faith and constancy who will always help us, and she might even come to our rescue by brandishing a club against the powers of darkness.