Wednesday in the 1st Week of Ordinary Time at Mississippi Abbey

In the Book of Job, the Lord asks Satan, “Where have you come from?” Satan replies, “I’ve been going to and fro on the earth, walking up and down on it.” One of our Abbot Generals who had to travel to and fro among many monasteries, said Satan should have been an abbot. Fr. Brendan has traveled so much that his sister once said to me, “Next time my brother is visiting New Melleray tell him I said hello.”

Jesus traveled a lot, too.  At the end of today’s Gospel, we hear that Jesus went throughout the whole of Galilee, going from village to village, preaching, healing the sick, and driving out demons.  Don’t we all have a few demons that we wish the Lord would cast out of our hearts?  Think of the eight capital sins, epecially pride! 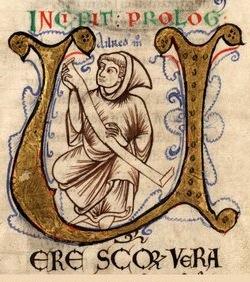 St. Aelred1 reproaches monks and nuns who have left riches and pleasures by entering the contemplative way of life, and now want to be called to council meetings and be given a role to play in every decision. Their pride is hurt when something is done without their sharing in the decision.

But pride is not always about one’s own excellence.  Sometimes it’s shame about one’s own defects or limitations. There was a young boy named Joseph Lahey2 who injured himself in a sled ride at the age of four. He suffered a spinal injury that left him with a large hump on his back. He was too ashamed to undress in front of anyone, not for showers, or swimming, or sports. He always tried to hide himself, to withdraw. But now he had to undress for a medical exam. The doctor was a Christian and a very kind man. He filled out his report and stepped out of the room for awhile, as doctors do. Joseph looked at the report and, in the space provided for “Physical Characteristics”, he saw that the doctor had written, “Joseph has a beautiful face and a wonderful smile. He’s a very lovable boy.” There was nothing at all about the hump on his back. That day Joseph’s basic disposition changed from shame to one of grateful love for all the good things he was given.

The vocation of every Christian, especially monks and nuns, is to help cast out demons by bringing the love of Christ to those we live with. That’s what Jesus did throughout the whole of Galilee, going from village to village, preaching, healing the sick, and driving out demons.