Wednesday in the Octave of Easter

“In times of prosperity remember adversity; in times of adversity do not forget prosperity” (Sirach 11:25).  The Easter Season provides us with an abundance of rejoicing in the Lord’s resurrection.  But does today’s gospel give us any hint to remind us of adversity? 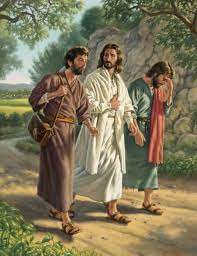 In the story of two disciples on the way to Emmaus, St. Luke tells us that one of them was named Cleopas.  He does not name the other one.  Why not?  Perhaps St. Luke wants us to put ourselves in the other disciple’s place, or maybe he didn’t know the other disciple’s name.  But that is uncharacteristic of Luke who, more than any other evangelist, researched and recorded the names of so many other faithful disciples of Jesus.  These two would have been famous, having seen the Lord after his resurrection.  It is more characteristic of Luke to contrast the good with the evil, the faithful with the unfaithful.

For example, Jesus dies between two thieves, one utters a prayer, the other offers curses.  Two rich men meet Jesus at the North and South ends of Jericho: At one end Jesus calls the rich young man to follow him, but he turns back.  At the other end Jesus calls the rich tax collector, Zacchaeus, who welcomes Jesus, and his whole household becomes Christians.  The angel’s words to Zechariah are disbelieved, but Mary believes.  Jesus is rejected at Nazareth, but welcomed in Capernaum, a Pharisee fails to offer hospitality, but a sinful woman wipes Jesus’ feet with her tears and dries them with her hair.  Those invited to the king’s marriage feast make excuses, but people on the wayside come with joy.  A poor man, Lazarus, rests in Abraham’s bosom while a rich man burns in hell.  A leper returns to give thanks, but not the other nine.  A publican prays for mercy, while a Pharisee boasts of his virtues.  An apostle betrays Jesus, another denies him, the rest abandon him, while his women disciples serve him and are the first to see the risen Jesus.

Perhaps St. Luke only names Cleopas because the other disciple did not remain faithful, even after seeing the risen Lord.  It was not unusual in the early Church for some disciples to fall away, and it is not unusual today.  Let us, in the fervor of our Baptismal graces, beware of infidelity, of a slow drifting away in times of prosperity, forgetful of the adversities that will afflict the ungrateful and the lukewarm.