Wednesday in the Second Week of Ordinary Time

Homily for Wednesday in the Second Week of Ordinary Time

Wednesday in the Second Week of Ordinary Time

Homily for Wednesday in the Second Week of Ordinary Time 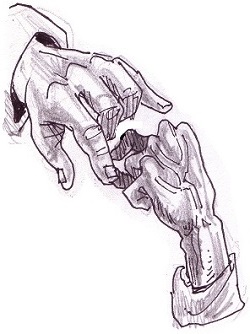 “There was a man in the synagogue who had a withered hand.”  His twisted fingers were like a shriveled weed that had wilted under the heat of a scorching sun.  A very old apocryphal tradition says he had once been a stone mason whose hand was crushed in an accident.   Pharisees were watching to see if Jesus would cure him on the Sabbath.  They had good hands, but their hearts were withered, and that is much harder to heal.

“Jesus said to the man, ‘Stretch out your hand.'”  His fingers unfolded and he wiggled them and turn his hand in every direction for all to see.  A gasp of awe rose up in the synagogue.  Neighbors looked at each other in wonder.  “[But] the Pharisees went out and immediately took counsel against him to put him to death.”

If Jesus looked at us, would he see someone with a withered heart, angry and nursing a grudge?  I once heard about an old man who died all alone.  He had isolated himself from his relatives because he adamantly refused to forgive an insult he suffered at a family gathering many years ago.  A withered heart is much harder to heal than a withered hand.   If only he and the Pharisees had broken their stony silence and cried out to Jesus for help, he would have forgiven their sins and healed their hearts with mercy, peace and justice.