Wednesday in the Thirteenth Week of Ordinary Time

In Screwtape's last letter to his nephew, Wormwood, he writes, “You let a soul slip through your fingers. … It drives me mad to think of it. How well I know what happened. There was a sudden clearing of his eyes as he saw you for the first time, and recognized the part you had in him and knew that you had it no longer. … [Oh], the degradation of it!—that this thing of earth and slime could stand upright and converse with [the One] before whom you, a spirit, can only cower.” 1

Demons are ferocious, seething with hatred, churning fury, like a storm. But face to face with Jesus, the unruly pack of devils who possess the two demoniacs among the tombs are terrified. In the Catholic Catechism we read, “The coming of God's kingdom means the defeat of Satan's.” 2 Screwtape ends his letter with this lament: “Sometimes I am almost in despair.” 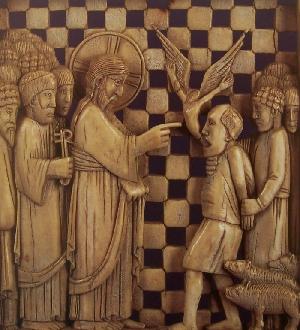 An old Scottish proverb warns us that the “devil's boots don't creak.” 3 Ferocious demons sneak up like thieves to snare the unwary and the weak. Churchill expressed it this way, “The malice of the wicked is reinforced by the weakness of the virtuous.” We are almost driven to despair! But with a single command from Jesus all the devils in the world can be put to flight. May Jesus stay with us, and we with him.