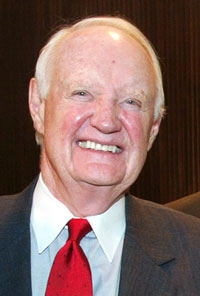 On November 21, Mr. Alonzo, (“Al”), McDonald, a generous benefactor and friend of the monks of New Melleray, died at age 91. Several years ago, Al donated funds for the outfitting of a beautiful chapel in our infirmary and also paid for three exquisite original icons now on display in our Guest House.  It was said of Al that he successfully climbed enough ladders in the business and political world, to get to the top – and didn’t like what he saw on the other side.  Later in life, Al’s mission was to draw from his considerable financial resources to promote and cultivate Christian culture in our contemporary society.  Specifically, he is known for endowing chairs at prestigious universities all over the world for the purpose of encouraging scholars who work to maintain Christian culture on campuses.  Among the world-class scholars he has supported are Stanley Hauweras of University of Chicago, N.T. Wright, retired Bishop of Durham in England, Sarah Coakley at Cambridge University, and Miroslav Volf at Yale.  Al was introduced to the monks of New Melleray through his acquaintance with our sisters at Our Lady of the Mississippi, whom he helped to build a new candy factory.  Our Fr. Stephen and three sisters attended Al’s funeral in Florida last week.  Fr. Stephen was invited to give the homily, later described by one of the sisters as “magnificent”.  For years, Al made annual retreats and became friends with a number of monks and nuns who will miss his bigger-than-life persona, booming laughter, and luminous smile.  May God receive him into that peace and joy which never end!