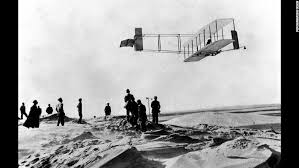 In a famous talk given to engineers in 1901 at a meeting in Chicago, Wilbur Wright, wanted to demonstrate to engineers the challenge of achieving the equilibrium required to keep a flying machine in the air.  Suspending a single sheet of paper in the air, he dropped it and invited the audience to note its erratic motion and lack of decorum as it descended curling, flipping, twirling, darting right or left, at no point keeping any respectable appearance of its original flatness.  The story of the Wright Brothers related by David McCullough, and especially the story of Wilbur Wright might be summed up as the story of a man managing to become airborne while maintaining something of the original flatness of the son of a Methodist bishop.  Actually, the rather distinctive lifestyle of the Wright family is one of the surprises of this very well written book.  The Wright Brothers never went to college, and their father, the Bishop, didn’t trouble himself much if they didn’t attend church so long as their absence was explained by absorption in a worthwhile activity – like originating man-powered flight.  The brothers were not adventurers but amazingly deliberate, methodical, and thoughtful inventors who spent countless hours observing the flight of birds.  I don’t recall God’s name being mentioned in the book so far.  Surely the quintessential American inventor and genius met God at a moment as he was being carried through the air.  It is left to the reader to imagine at what that moment that might have happened and how the Wright Brothers might have talked about the encounter.  Over all, the monks have appreciated learning more than we ever knew about these admirable men and their unique achievement.