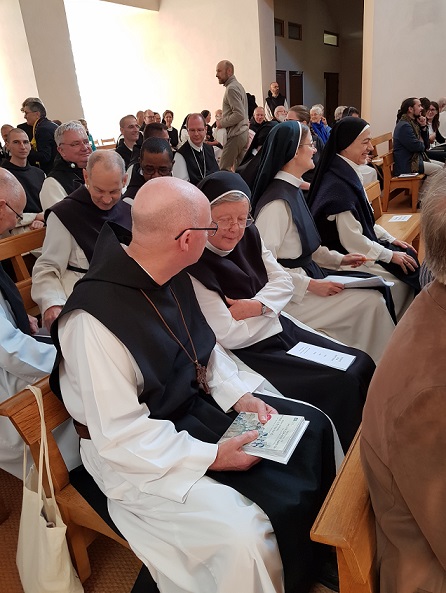 From July 16 to 19, Abbot Mark and Brother Nicholas attended a colloquium on the “Charter of Charity” at “Our Lady of Dallas” Cistercian monastery in Dallas Texas.  The event was conducted in celebration of the 900th anniversary of the Carter of Charity.  Thirty guests from twelve countries and four continents gathered for several days of conferences and informal sharing among participants.  Speakers included superiors, monks, nuns and lay experts.  Participants discussed the history of the Cistercian Order, as well as its spirituality and theology.  The “Charter of Charity”, written by St. Stephen Harding in 1119 stated as its purpose to elucidate “by what covenant, or in what manner, indeed, with what charity their monks throughout abbeys in various parts of the world, though separated in body, could be indissolubly knit together in mind.  They considered that this decree should be called the Charter of Charity, because, averting the burdensome levying of all exactions, its statue pursues only charity and the advantage of souls in things human and divine.”  Superiors of the Order of Cistercians and of the Order of Cistercians of the Strict Observance, (Trappists), both offered updates on the situations of their monasteries.  Our Abbot offered reflections on the present condition and future of Trappist communities in the U.S.  Abbot Mark, on his return remarked especially on the gracious and lively hospitality offered by the monks of Our Lady of Dallas and how well organized and conducted the colloquium was.