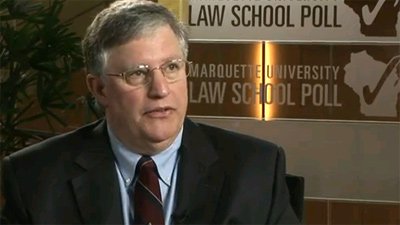 Dr. Charles Franklin is a professor of law and public policy as the Director of the Marquette Law School Poll. He is at New Melleray today us two conferences related to opinion polling. The morning session pertains to the history and evolution of opinion polling in the United States while the evening session covers the more detailed mechanics of how opinion polling takes place today.

Dr. Franklin received his Ph.D. in Political Science from the University of Michigan. He has been the director of the Marquette Law School Poll since its inception in 2012 and became a full-time member of the faculty in 2013. Prior to joining the Marquette faculty, Franklin was a professor of political science at the University of Wisconsin-Madison beginning in 1992.

In 2005 Franklin co-founded Pollster.com, an award winning website for the analysis of polling data. The site received the Warren J. Mitofsky Innovators Award in 2006 from the American Association for Public Opinion Research, was featured in the New York Times Magazine’s Year in Ideas of 2007, was cited by data graphics author Edward Tufte for best visualization of the 2008 election and by Time magazine as one of the 50 Best Websites in 2008. In 2010 the Huffington Post acquired Pollster.

Dr. Franklin has been a member of the ABC News election night analysis team since 2002.

from Rule of St. Benedict : Chapter 3. Summoning the Brothers for Counsel

As often as anything important is to be done in the monastery, the abbot shall call the whole community together and himself explain what the business is; and after hearing the advice of the brothers, let him ponder it and follow what he judges the wiser course. . . . If less important business of the monastery is to be transacted, he shall take counsel with the seniors only, as it is written: Do everything with counsel and you will not be sorry afterward (Sir 32:24).