A Sketch of the Abbey Church 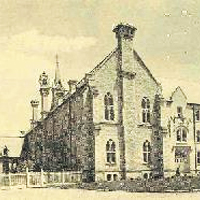 In 1849, when Iowa was still mission country and a rugged frontierland, Cistercian monks from Mount Melleray Abbey, Waterford, Ireland, began arriving in the New World to found and build the New Melleray monastery. The first twenty years saw their primitive quarters constructed, the land cleared for farming, and a young community of hard-working Irish monks gradually established in their new home. Then, with the close of the Civil War, the restoration of order and peace, it was time for this community of fifty to plan for a permanent monastery.

A local architect, John Mullany, was now engaged to design the new monastery, and Mr. Mullany’s credentials made him a wise choice. He had lived for a while in the shadow of Mount Melleray and was well acquainted with monastic life. He had also worked a while with his father who was an architect, and had worked three years with the brilliant and noted architect Augustus Welby Pugin. In 1847 he moved to America, and in 1857 was asked by Bishop Clement Smyth to come to Dubuque to construct its cathedral–still standing at Third & Bluff Streets.

Evidently, John Mullany was strongly influenced by Pugin, one of the foremost proponents for the revival of neo-gothic architecture in the nineteenth century. It was an era of growth and physical expansion for the church, and Pugin literally dotted Great Britain with buildings, churches, schools, and monasteries. Mullany designed along traditional Cistercian models in the neo-gothic style of pointed architecture. Pugin had stoutly maintained that neo-gothic was indeed the only truly Christian form of architecture. The arched windows, pitched roof, use of asymmetry, and overall vertical form, evidence Pugin’s influence. But even more importantly, some of Pugin’s principles of architecture found expression in the designs of Mullany.

“Pointed architecture,” said Pugin, “does not conceal construction, but beautifies it.” Advocating simplicity and economy of form, he said there should be no features of a building which are not necessary for convenience, construction, or the purpose for which the building is designed. The material and forms should all be expressive of the unique purpose of the building.

“The severity of Christian architecture is opposed to all deception. We should never make a building erected to God appear better than it is by artificial means. It is better to do a little substantially and consistently with the truth, than to produce a great but fictitious effect.”

These solid architectural principles resonate deeply with the Cistercian quest for simplicity and authenticity. The function of frugality and austerity in the life of a Cistercian monk is the freedom to be united in love with the heart of all reality. Renunciation of outward embellishment and distinction releases the pure joy of communion. Cistercian art, in its most authentic forms, has consciously sought to strip away the accidental and distracting, and to manifest the quiet confidence of interior peace. The natural forms of stone and wood speak from the heart of their very nature. And they call men and women to return to their own hearts, to yield to the quiet presence of beauty and, through the transparency of natural forms, allow the transcendent to appear. Cistercian churches, wrote Saint Bernard, should stir penitents to compunction, rather to spellbind the sightseers.

Under Abbot Ephrem, plans were drawn up for the construction of the entire monastery in 1867. The Dubuque Daily Times of December 28, 1867 reported an estimated cost of $300,000 for the whole project, and predicted that “it will be a noble pile.” Construction was begun in March of 1868 and the north and east wings were completed by November 1870. The Daily Times of January 1, 1871, reported that these wings were constructed for slightly less than $100,000. Most of the work had been carried out but the brothers contributed some labor and materials, which helped keep the cost down. The estimate for completing the whole project had now risen to $500,000.

It was not until August 1875, however, that the buildings were finally occupied. Proposed heating systems and plans all proved unsuccessful until the boilers were finally installed. As Br. Kieran wrote in his eye-witness chronicle of these years, with the assaults of the severe winters on the unheated buildings, “it was wonderful, truly, that the untenanted house did not tumble to the ground.” By the time the monks did enter the buildings, the kitchen wing had also been completed.

In the original plans the North wing, which is now the church, was intended to house the library, the refectory, and store rooms on the first floor, and a dormitory on the second. The East wing was to house the Chapter room, business offices on the first floor, and another dormitory on the second floor. The church was temporarily located in this second-floor area until in the 1920’s it was moved, temporarily, to the second floor of the north wing. The permanent place of the church was meant to be the south wing, running parallel to the north wing. By the time construction was resumed on the south wing in the 1950’s, the original plan had been set aside.

It would appear, however, that Mullany intended the proposed church to be of nearly the same dimensions as the present church, 30 X 210 feet. The church proper was to have been 180 feet long, with a width of 30 feet. It would have completed the quadrangle and been of a height comparable with the other wings. A tower of 200 feet (a characteristic Pugin design) was to have been erected at the east end of the church wing.

A financial crisis of the community in the 1880’s spelled the end of further building plans at that time. The guesthouse was completed in 1928, and construction of the rest of the monastery was resumed in the late 1940’s, with completion in the early 1960’s.

There was now the opportunity of providing for a permanent church. Plans were first proposed for razing the north wing and erecting in it’s place a round church. These plans were rejected and it was not until the early 70’s that the fate of the north wing was again discussed. Because of extensive maintenance and repairs needed, the possibility of demolishing it was again raised. However, its future was assured when it was decided to proceed with tuck pointing and re-roofing.

With the decision in 1973 to remodel the north wing for the permanent location of the abbey church, the gifted architect Willoughby Marshall was invited to assist with the early church planning. The second floors were removed from the north and “Linney” (old kitchen) wings, thereby allowing use of the full height of the structure for the church and for a Chapter house in the Linney wing. All the heavy plaster and interior moldings were removed, and also the stone dividing-walls on the floors. Too, extensive renovation of the basement areas was required.

At this point a liturgical designer, Frank Kacmarcik, and Ted Butler of Hammel, Green & Abrahamson, Minneapolis, were engaged to execute the interior design and furnishings. The walls were tuck pointed to give a monolithic appearance. Areas which had been faced with the brick of chimney flues were now refaced with the stone saved from the demolition of walls on the first floor. The original beams and purloins were sandblasted, and Douglas fir was used as the decking in the roof, which rises 49 feet to its peak. Red quarry-tile was chosen for the flooring throughout. The choir stalls, doors, tabernacle house and furnishings are constructed of solid red oak. The altar is black opalescent granite, quarried in northern Minnesota, and weighs five and a half tons. A tabernacle house is situated behind the altar, allowing a blessed sacrament chapel within the church.

The natural qualities of the materials used in construction respond to the varying moods of light throughout the day, and further in the various seasons of the year.

The church was opened on Easter Sunday, April 18, 1976 after remaining closed for more than two years. It was consecrated on July 16, 1976—the one hundred and twenty-seventh anniversary of the founding of this community, and the two hundredth anniversary of our nation.

As this church stands, it seems a vivid and continuing symbol of those early monks, their ability to adapt and renew their monastic traditions here in the New World, and to respond with faith to the challenges of the future.

Stories from the Seniors