Are you a pessimist, a gloomy unbelieving pessimist? Oscar Wilde, Irish author and poet, writes that a pessimist is one who, when faced with the choice of two evils, chooses both. In the world of Peanuts, Charlie Brown is often a comic pessimist. Propping his elbows on top of a brick wall, Charlie asks his little friend, Linus, “What would you do if you felt that no one liked you?” Linus says, “I'd try to look at myself objectively, and see what I could do to improve.” Charlie Brown replies, “I hate that answer!” In another scene he says to Linus, “I understand your fear of libraries. Library fear is similar to other mental disturbances. You fear libraries because they are strange and you feel out of place. All of us have places where we feel like that.” Linus asks him, “Oh? Where do you feel out of place, Charlie Brown?” He says, “On Earth.” Me, too! 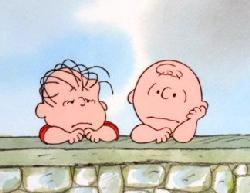 Doubting Thomas was also a pessimist who felt out of place among believers and was quick to magnify difficulties in every event. After the death of Lazarus, when Jesus told his disciples he was going back to Bethany, Thomas, like a prophet of doom, said, “Let us also go, that we may die with him” (Jn 11:16).

Later, when a band of soldiers came to arrest Jesus in the Garden of Olives, Thomas may have run faster and farther than all the rest, for he did not return with the other ten apostles when they reassembled behind locked doors. He was like Linus who said, “The best way to respond to problems is to avoid them. No problem is so big or so complicated that it can't be run away from.” When Thomas finally stops running and comes back to the room where the disciples are staying, he says, “Unless I see the mark of the nails in his hands I will not believe” (Jn 20:25). He's in a dark place. He doesn't even try. 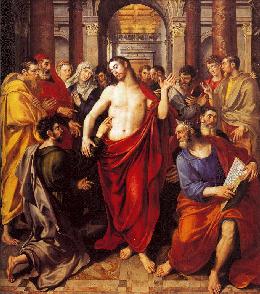 In one comic strip Lucy sees Charlie Brown lying on the ground, wrapped tightly in the strings of his wayward kite. He complains, “I can't get this stupid kite in the air.” She says encouragingly, “O, come on now, that's no way to talk. The whole trouble with you is you don't believe … Go ahead, say to yourself, I believe that I can fly this kite.” He repeats it doubtfully. She tells him to say it louder. This time Charlie repeats it with a stronger voice and more conviction, “I really believe that I can fly this stupid kite!” Surprised by the optimistic tone of his response, Lucy says, “You do? I'll bet you ten-to-one you're wrong.” Pessimism is almost incurable.

A whole week goes by with Thomas arguing toe to toe with the other apostles, neither side convincing the other. Then, all of a sudden, Jesus passes through the locked doors, stands among them and says, “Peace be with you. [Thomas] put your finger here and see my hands, and bring your hand and put it into my side, and do not be unbelieving, but believe.” At last, overcome by the divine mercy, Thomas responds in total awe, “My Lord and my God!” 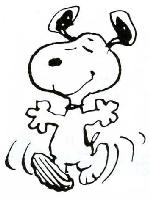 Thomas was a born pessimist, but reborn as a Christian optimist. The next time he left the company of the other apostles, it was not in a headlong flight for his life, but in a headlong, heartfelt desire to proclaim loud and clear to all the world the good news that Jesus is Lord and God, crucified to free us from our sins, and risen to bring us with him into eternal life, because Earth is a dark valley. It is not our true homeland. We are out of place here.

From now on only the happy dancing of an ecstatic Snoopy elevated in midair can begin to express the optimism and belief of St. Thomas the Apostle. He and we can be as happy as Snoopy, to whom Lucy says, “Stupid dog, the whole world could get blown up any minute and all you think about is dancing!” With a joyful smile, Snoopy continues dancing in midair and says, “Well, I could think about eating but it's too early in the morning.” That's not true for us, for we are about to receive the risen Jesus in the Eucharist. So, let all gloomy thoughts and fear of libraries and other dark places on earth be cast away, and let our hearts dance for joy in the brightness of God's divine mercy.

A father and his young daughter were driving along highway 52 in Minnesota. Between the small towns of Canton and Harmony they passed several Amish couples in buggies pulled by horses. The girl asked her father, “Why don't they drive cars?” He replied, “Because they don't believe in cars.” Puzzled, his daughter said, “But can't they see the cars?” You don't have to believe in what you can see with your own eyes.

Thomas refused to believe what the other apostles saw with their own eyes, the risen Jesus. We call him, “Doubting Thomas.” But it was more than doubt. It was willful disbelief. He said, “Unless I put my finger in the mark of the nails I will not believe.”

The failure of the other apostles to persuade Thomas captures the difficulties we experience when someone we love does not believe. What unites all of us here this morning is much greater than the work we share together, a work the sisters could not do without your help. What unites us is our faith and our love of the risen Lord. But there are people we love who do not believe. Karl Rahner writes, “How many of us are divided in what is most intimate and ultimate. If these were persons about whom we were indifferent … then everything would be so much easier to bear. … But these are people who are related to us, whom we love, to whom we are bound with a thousand ties of blood, of shared feelings, of life and destiny…”1 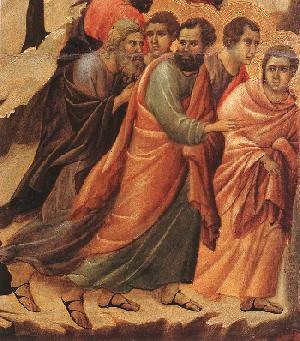 Thomas, called Didymus, the twin, began well, responding immediately to the call of discipleship, following Jesus joyfully. But there is total silence about his twin that reveals a difference in beliefs. Other brothers, Peter and Andrew, James and John, were united in following Jesus. But not Thomas and his twin. Did he feel anguish when one he loved did not become a disciple of Jesus? Christ said there would be divisions because of him. The unbelief of family members can be challenging to our own faith.

At one time Thomas trusted in his fidelity, his courage, his willingness to give up his life for Jesus. He even said, “Let us also go [to Jerusalem], that we may die with him” (Jn 11:16). But when the hour came, Thomas fled headlong through the trees at Gethsemane. On that dark night what he believed about his own courage came crashing down around him.

It is a devastated Thomas who entered the upper room after the crucifixion. His self-respect was gone, his conscience was wounded and raw, and his heart was darken. Jesus was dead and God was absent. He was totally unprepared when the other ten apostles joyfully proclaimed that Jesus was alive and they had seen him. 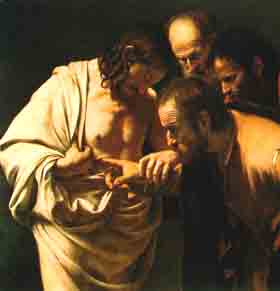 How often we try without success to bring someone we love to share our faith. Yet, not even ten fervent apostles were able to convince Thomas that Jesus had risen from the dead. The Greek text says they kept telling him, over and over. But Thomas was adamant in his disbelief. There is even a tone of anger and resentment in his response. He says, “Unless I put my finger into the wounds I will not believe.” The Greek word is balo. It means to throw his finger into the wounds. It's not gentle at all, but violent. Thomas is angry with Jesus, and with the other apostles, and with himself. He doesn't believe in the resurrection, he can't and he won't.

Down the centuries many people have shared his name and his disbelief. Thomas Jefferson rewrote the Gospels cutting out anything miraculous. The Jefferson Bible ends with these words: “Now, in the place where he was crucified there was a garden; and a new sepulcher. They laid Jesus there and rolled a great stone to the door and departed.” Period! There's no mention of the resurrection. And Thomas Edison, in his book titled, The Great Thoughts, writes, “I have never seen the slightest scientific proof of the religious theories of heaven and hell …” He invented the light bulb, but he was blind to what is most important. Is there then no hope for those who do not believe? 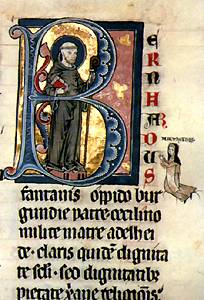 St. Bernard writes, “Christ has come to water the dry places, to illuminate the gloomy spots, and to inflame with warmth those who are cold. He has quickened my sleeping soul.” Mary Magdalene was lifted out of her gloom when Jesus spoke her name; the two disciples at Emmaus were quickened by Jesus when they recognized him in the breaking of the bread; and Thomas was inflamed with love when Jesus showed him his wounds. In a world divided between belief and disbelief, it is our encounter with divine mercy that saves us. No matter how much those we love are entrenched in disbelief, let us keep believing and praying for the power of divine mercy to quicken their sleeping souls.

After Jesus rose from the dead, Thomas no longer had to believe in the resurrection. He saw the risen Jesus, as surely as Amish couples can see cars passing their buggies. But once quickened by his encounter with the divine mercy of Jesus, he began to believe in what he could not see, that is the divinity of Christ. So Thomas was the first to say, “My Lord and my God.” And when he said that, I wonder if he threw back his head and let a great joyous burst of happy laughter rise from his chest as the weight of all that is dark and evil fell away from him and he was inflamed by his encounter with the divine mercy and love of Jesus.