The teacher in a catechism class for young children taught them that the miracles of Jesus are signs of his divinity. Jesus changes water into wine, cures the sick, feeds a multitude of five thousand people with a few loaves and two fish, walks on the water, gives sight to the man born blind, and raises Lazarus to life. But it was only after St. John the Apostle saw the empty tomb with the discarded burial clothes that he finally believed. 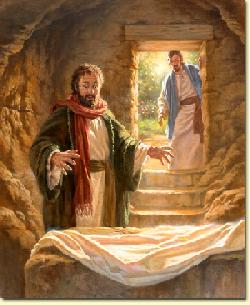 A young boy in the class named Jeremy was dying from leukemia. So he was more than normally attentive to stories that Miss Miller told about the resurrection. On Easter Sunday, she gave them an assignment for the following week. Each child received a large plastic egg and was asked to put something inside it that represented rising to new life, and to show it next Sunday. The kids were enthusiastic, except for little Jeremy who seemed preoccupied and distracted. Miss Miller wondered if he really understood the assignment.

Next week the children shared the signs of new life they put inside their colorful plastic eggs. One child put a flower inside her blue egg. In a red egg there was the discarded skin of caterpillar, and a yellow egg had a plastic butterfly inside. When Miss Miller opened Jeremy's green egg, it was empty. She did not want to embarrass him, so she quietly set it aside and reached for another one. 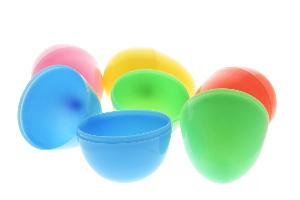 But Jeremy said, “Miss Miller, aren't you going to show what's in my egg?” She replied, “Jeremy, honey, your plastic egg is empty.” “Yes,” he replied, “because the tomb of Jesus was empty!” She was amazed at Jeremy's correct understanding of this great sign of Christ's resurrection. Then Jeremy made a profound connection. He said, “And my tomb will also be empty!”

Three months later, Jeremy died. When his classmates came to pay their respects at the funeral home each one of them put a plastic egg on top of his walnut casket. All of them were empty.