Martyrdom! The pain of it strikes fear in my heart, and the courage of St. Andrew the apostle amazes me. When he saw the X-shaped cross on which he would be crucified, this manly martyr lived up to his name and embraced the instrument of his death by saying, “O good cross, that received beauty from bearing our Lord’s limbs, I have ardently loved thee, long have I sought thee, … receive me gladly, … present me to my Master.” 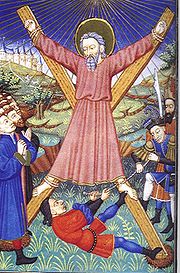 As we pass the half way point in this Year of the Priest, the feast of St. Andrew, apostle, priest, and martyr, reminds us that putting on Christ is all that matters, for each of us, whatever the cost. Consider the story of Aladi Omer, a former Muslim in the Sudan who converted to Christianity. He was branded an apostate and threatened with death. His family denounced him. His university expelled him. He went through grueling interrogations, and beatings, and he was injected with impairing drugs. He tried to leave Sudan, but each time the police prevented him. Now he is in hiding, a living martyr for putting on Christ.

But I shudder at the thought of such suffering for being a Christian. Down deep, I sigh with relief that it isn’t happening here. Yet, here in the 21st century, in the United States, are any of us really safe? In this world Christians have never been, and never will be, exempt from the cost of giving witness to their faith in Christ. We may escape the red martyrdom of shedding our blood. But there are other less costly ways of giving witness to Christ: like making a sign of the cross before meals in public places, or wearing a religious habit outside the community, or the Roman collar when traveling. We put on Christ by confessing our sinfulness in the sacrament of reconciliation, and by speaking out for the right to life of unborn children, and by being chaste. St. Paul writes in his Letter to the Romans, “… put on the Lord Jesus Christ, and make no provision for the flesh, to gratify its desires” (Rom 13:14). The feast of St. Andrew reminds us that we are called to put on Christ in a thousand little ways by the way we live, and that these are the best preparation for the way we may die.

St. Andrew was an ordinary fishermen by trade, not trained in Jewish religion as a Rabbi, or a Levite, not a Pharisee or Sadducee. He was first called by Jesus to be an ordinary disciple, and then to be an apostle, and later a missionary priest, and finally a martyr. 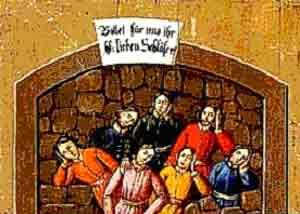 If we give witness to Christ by the way we live, we will not have to fear the way we die. There is a story told by St. Gregory of Tours about the Seven Sleepers of Ephesus who were afraid to be martyrs and yet did not want to renounce their faith during the great persecution of Christians by the cruel Roman Emperor Decius, who said: “Offer sacrifice to idols or die.” Friend betrayed friend, fathers betrayed sons, and daughters betrayed mothers. Seven young men at Ephesus, fearing martyrdom, fled and hid within a deep hillside cave at the edge of a large pasture. But their hiding place was betrayed and the Emperor ordered the mouth of the cave to be walled up so that they would die of starvation, (like St. Maximilian Kolbe and his companions in our own times). It happened that while the cave was being closed they all fell into a deep sleep. A hundred and ninety-six years later, about the time St. Benedict was born, a farmer wanted to use the cave as a shelter for his livestock so he broke down the wall that sealed it. Then God raised these seven young men from their deep sleep. They thought they were waking up after a single night. Venturing out, still fearful of being caught, they were astonished to see Churches, and crosses mounted on top of the gates of Ephesus. While they slept for almost two hundred years the world they knew had converted from paganism to Christianity under a new Emperor, Constantine, and now, two centuries after the death of Emperor Decius, the Seven Sleepers of Ephesus gave witness by being raised from the sleep of death. Faithful to Christ by the way they lived, their martyrdom was very gentle, and when they woke they put on Christ in a new way, as signs of the resurrection. We also need not fear the way we die, if like St. Andrew, and Aladi Omer, and the Seven Sleepers of Ephesus, we also put on Christ by the way we live.