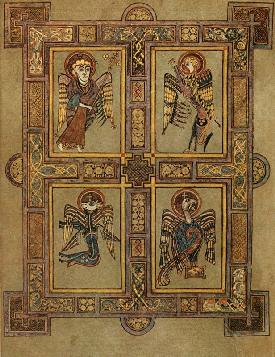 In our liturgical representations, the Gospel of Matthew is depicted as the human face. The other gospels have the face of a lion (for Mark), the ox (for Luke) and the eagle (for John). These icons come all the way from the Old Testament vision of the prophet Ezekiel on the four living creatures, . Then in the book of Revelation, in a vision of heavenly worship, the modified figures of these four creatures occupy the center stage around the throne of God, . Later on, the Fathers of the Church tried to relate who these creatures were. St. Irenaeus identifies these four living creatures as the four evangelists.

The gospel of Matthew opens with the human “genealogy of Jesus Christ, the son of David, the son of Abraham,” . He is the Son of David to whom the messianic promises were given. Jesus is shown as coming from God, not with a hazy, mysterious feature. Rather, he appears as a human person with concrete traits and personality, unique like any of us. The first gospel then paints clearly to us that Jesus the Son of God assumed a human countenance. He is the very face of God.

This human character of Christ was clearly perceived by the community of Matthew. The community consisted mainly of Jewish converts to Christianity. How they longed for the coming of Immanuel, ! The good news then for them is that God has come as Immanuel (God-with-us) in the person of Jesus, .

Today’s gospel tells us that in Capernaum, Jesus called on a man, a tax collector seated by his post to follow him. Immediately the man got up and followed him, . It is as simple as that! Jesus called him, and he followed. This vocation scene precedes a winding background on the life of the man. He is named “Matthew“. In Mark and Luke, he is called “Levi” (Lk 5:27), the son of Alphaeus, . From the list of the Twelve apostles, he seems to be the brother of James, another Alphaeus son, who is known as James the Less.

It is not clear who of these Alphaeus brothers was called first. In the list of the Twelve, Matthew figures ahead of James. If he was called earlier, then like Andrew, , Matthew led his brother to Jesus for discipleship. If he responded to Jesus later than James, I would understand why. Being a tax collector, he wanted to build a name, a fortune or a secure future for himself. He was a talented man skillful with the use of his pen, both in calculating numbers or in writing down words. To him, as any finance man, money could come easy. Then with wealth, he hoped to gain friends. A saying goes that “wealth is relative“, that is, with wealth, relatives and friends appear left and right. Levi’s dream was to reach out to people by means of a successful financial venture. Perhaps, yes, among his comrades and the masses, those who can hardly pay enough taxes. But never close with those who felt victimized by a traitor like him who sold his country and his people to foreign conquerors. Perhaps, before his face, a few would be friendly with him in view of some favors. Behind his back, he would be hated and verbally stabbed. Pharisees and scribes, the righteous elites, would not hesitate to lump him among major sinners that must be ostracized.

Levi would have enjoyed his wealth, but there was emptiness within him. He was still worried about his future or the lack of loyal friends. He was secure at his post, but he was uneasy all the time. He was in search of God, a God not so judgmental, legalistic and condemnatory. He longed for a God with a human face. He was aware of his fragility and sinfulness. People’s accusations on him were valid in many ways. How he longed for an authentic human person he could relate to, someone who would understand him and lead him out of his predicament! He has been hearing of Jesus and his prodigies. Jesus was not of the social and religious elite, but he seemed to be very human and humane. How Levi wished that one day he would meet this Jesus! He was ready to follow him all the way.

So as Jesus saw and called on him, Levi who would be called Matthew immediately stood up, left his table and followed Jesus. Joy was written all over his face, even as he had to abandon everything, his wealth and his past. He was able to gather friends and join him in feasting with Jesus to mark his new life. The Pharisees were there too, but only to criticize Jesus and qualify Matthew as the sinner. They complained to Jesus’ disciples, “Why does the Teacher eat with tax collectors and sinners?” . Matthew was defenseless, but Jesus came to his rescue. He told them, “People who are healthy do not need a doctor; but sick people do. I have come to call sinners, not the self-righteous,” . Such was the most human trait of God. Jesus has come bringing God to meet His people, not to terrify or condemn them, but to heal and save them. Whoever was ailing, He cures. Whoever has sinned, he forgives and saves.

The Pharisees instead came presenting themselves with godly masks. Loyal to their pious acts, they felt close to God. But they despised those who were not godly like them. So they stayed away from the publicans (the tax collectors) and sinners. They dared not be contaminated by their impurity. Righteous they may seem in their piety, but before God, they were self-righteous. Jesus reminded them of God’s preference, “It is mercy I desire and not sacrifice,” . The Pharisees with their pretensions were sinners as well. They were in worst state because with lack of repentance, God could not save them. Since they were blinded to their illness, the physician could not heal them.

This is what Jesus has come for—to Matthew, and to any disciple, you and me. Jesus comes as a doctor who could heal. The medicine which he prescribes is his own life of humility and obedient service to God. He comes as the Savior who stays on our human level and lifts us up to God. He calls, and then He sends the saved ones to be evangelizers. Fearful and weak, we may be. But Jesus assures us: “I will be with you until the end of time,” , especially at the time of appearing before the Father of mercy and love. He is there to give us a good bill of health fit for the Kingdom.