Feast of St. Matthew the Apostle at Mississippi Abbey

Homily for the Feast of St. Matthew the Apostle at Mississippi Abbey

Today’s gospel is one of my favorites.  It sums up my personal vocation story, my way of following Christ, from about 1965 to 1991.  I ate and drank with sinners.

I recall an evening somewhere in the early 80’s when three guys from the Office I worked in came by my house.  They had been playing softball and were celebrating their victory.  We sat around in the living room and drank a few beers and told each other stories.  Around midnight one of us got a bright idea: we went around to the homes of some of our co-workers, stood outside their bedroom windows, and sang a 3-part harmony version of “What kind of fool am I?”   The various answers we got cannot be repeated in Church.

If the four of us had been college students it would have been a dumb stunt. But no, we were in our 30’s and 40’s and we were all psychologists of one kind or another!  It was dumber still!  But my point isn’t the dumbness of the stunt.  Nor is it sinfulness as measured on some sort of scale of evil.  We each had more colorful histories of that than is tasteful to tell.  The point is the need we were trying to fill, the orientation of our hearts. 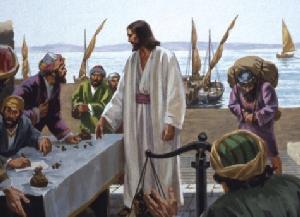 When Jesus Christ comes to a person, when He looks at him, He fills the need that the person sought by sin.  Being made in the image of a Trinitarian God, we were made for a happiness we cannot give ourselves.  Such happiness, though, must be freely chosen, freely received.

Sin rejects this, preferring to give oneself happiness, preferring to acquire.  Such self-given happiness is more correctly called pleasure.  Pleasure in itself is a good, God-given thing.  When we set our hearts on it as “it doesn’t get any better than this” then it counterfeits happiness.  We sell ourselves short; we settle for less.

Matthew was settling for less the day he encountered Jesus.  His encounter is an interesting contrast to the Rich Young Man who also encountered Jesus.   Tax collectors in those days collected more than the required tax and kept the difference for themselves.  Matthew’s “wealth” was illegitimately gotten.  The rich young man’s wealth was presumably legitimate.  Matthew was widely regarded as a crook and enemy of the Jewish people.  The rich young man had kept all the commandments from his youth and was doubtless a respected member of the community.  But here is the key difference: the rich man volunteered to follow Jesus; Matthew was called.  Perhaps Matthew was called because the way of Christ is the way of non-honor.   Matthew was familiar with that; perhaps not so the rich young man.  His wealth and family were sources of honor. He could not renounce them.  Matthew had no honor to lose. 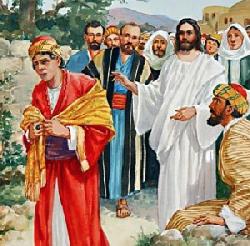 Matthew, you see, was sick.  He was spiritually sick.  He had a disease of perception.  Jesus came to correct it, to give a new pair of glasses.  This was important because the eyes are the pathway to the heart.  Whether it is vision or understanding that is meant by “seeing,” it affects the heart and what it will be set upon (our beliefs).   What the heart sets itself upon, what it loves and believes is a matter of judgment.  We judge its importance. To do this we need a standard.  The standard Jesus gave, the new pair of glasses he prescribed to correct distorted perceptions, was love of the Father.  From that love would come love of those made in His image.  And that love would be a self-sacrificing love. The standard of judgment, then, was the important-in-itself. Matthew had judged by the intensity of pleasure.

When Jesus looked at Matthew and called him He gave him a happiness Matthew could not give himself.  It was different from pleasure; it was permanent.  Permanent happiness is called salvation.  We find it when we love what we can never lack when we love it.