Feast of St. Matthew the Apostle

Homily for the Feast of St. Matthew the Apostle

“Who, me?” In the Church of San Luigi in Rome there’s a painting by Caravaggio about the call of St. Matthew.  Levi the tax-collector is seated at a customs table with four assistants, counting the day’s income. Christ enters with Simon Peter and stretches out his right hand in exactly the same way that God’s hand is stretched out toward Adam on the ceiling of the Sistine Chapel. Caravaggio is telling us that God has become man and now reaches out to us in divine friendship. Only two words break the silence of this dramatic moment in the history of salvation, “Follow me.”  The presence of Peter next to Jesus is a reminder that the call to follow Christ brings us into a saving unity with all Christ’s disciples.

Levi, surprised by this intrusion into his space, draws back in his chair, and gestures toward himself as if to say, “Who, me?” At the same time his other hand is still on the coins he was counting before Christ said, “Follow me.”  Many questions spring up to delay his response: “Why are you calling me? Where to? For how long? What can I take along? What will I be doing? What will I receive?” But Christ’s call is 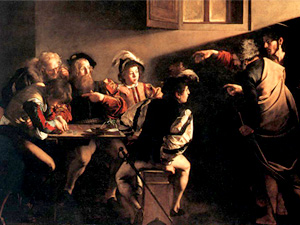 immediate, “Follow me,” now! Jesus didn’t sit down to answer every question Levi might have. The answers will come later, while Levi is following Jesus. Right now Levi’s feet must decide the direction of his love: money or Jesus. His questions can be sorted out later. The call fills the whole room, indeed the whole earth, “Follow me.”  It’s a call everyone in the room could hear. But only Levi pushes his chair out of the way and follows Christ leaving riches behind him.

Well, not exactly. He receives new riches. Instead of Levi he receives a new name, Matthew, the gift of God. In place of money he will receive heavenly treasure. In place of the company of tax collectors he receives the friendship of Christ and his disciples. In place of a tax ledger he receives divine inspiration to write a love story about Jesus, the Gospel of Matthew.  Did he have questions?  Of course he did.  But the answers came later, after he made his choice to follow Christ.  It is the same for us in many of our choices.  Understanding God’s will for us often comes later.  First we act out of love to follow Christ.

Feast of St. Matthew the Apostle

Today’s gospel is one of my favorites. It follows up well on last Thursday’s gospel about the sinful woman who washed Jesus’ feet and Sunday’s call to serve one master, to take a stand. These gospels tell me what God is like. Today’s gospel sums up my personal vocation story—my way of following Christ—from about 1965 to 1994. I ate and drank with sinners. I fit in well! I can see why Jesus chose to socialize with them.

What would have distinguished them for Jesus would not have been the actions they took or didn’t take. They might have skipped temple, stole, lied, and slept around. The importance of these things for him would have been their function as symptoms of something deeper; of a heart set on things that would not last, on needs that could not truly satisfy. They were taking a stand, not on rock, but on sand, on things that shift around. Jesus could see the depths of their hearts. These were not depths that they had never experienced, but rather depths that they had once experienced as children, had forgotten, and had left behind.

When Jesus Christ comes to a person, when He looks at him, He fills the need that is sought by sin. It is nothing less than a miracle, as I recall, that a man accustomed to living from the shallowest part of the heart—where pleasure is ultimate—is suddenly able to live from what is deepest in him. In this miracle, he does not receive errorless judgment; he receives an on-going willingness to learn and be corrected. This is wisdom.

Being made in the image of a Trinitarian God, we were made for a happiness we cannot give ourselves. Such happiness, though, must be freely chosen, freely received. Sin rejects this, preferring to give oneself happiness, preferring to acquire. Such self-given happiness is more accurately called “pleasure.” Pleasure in itself is a good, God-given thing. He placed it in our hearts at the shallowest level because it lasts such a short time. When we set our hearts on it as “it doesn’t get any better than this” then it counterfeits happiness. It soon becomes “Is that all there is?” We sell ourselves short; we settle for less.

Matthew was settling for less the day he encountered Jesus. Matthew, Jesus tells us, was sick. He was spiritually sick. He had a disease of perception. Jesus came to correct it, to give a new pair of glasses. This was important because the eyes are the pathway to the heart. Whether it is vision or understanding that is meant by “seeing,” it affects the heart and what it will be set upon. That new pair of glasses is single-hearted love for the Father.

When Jesus looked at Matthew and said “Follow Me,” he distinguished Matthew from the volunteers he had met. The rich young man, the man who wanted to bury his father first, and the man who wanted to kiss his father goodbye first were all volunteers. Matthew was called. We, too, were volunteers when we entered the monastery and went through formation. We, like the volunteers in the New Testament, had to decide if anything will separate us from the love of Christ. Then, at our profession of vows, our name is called.

When Jesus looked at Matthew and called him He gave him a happiness Matthew could not give himself. It was different from pleasure; it was permanent. Permanent happiness is called salvation. We find it when we love what we can never lack when we love it.