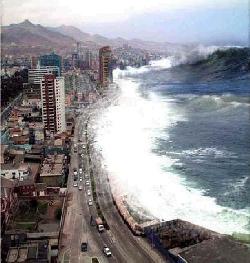 Last year, on the day after Christmas, two continental plates under the Indian Ocean suddenly exploded. For a record breaking ten minutes an enormous rupture shook the earth, lifting the ocean floor along a 780 mile fault line, causing a giant tsunami. When this pregnant wave approached shallow waters it swelled up and rolled over the surrounding shores, submerging cities, villages and farms, drowning about two hundred thousand people in its deadly belly, silencing screams of sheer terror. Today we remember, and we pray for them. It is dismaying how quickly the joyful celebration of Christ’s birth was followed by the tragedy of suffering and death for so many.

And when we remember that a far greater evil, the violence of abortion, is killing not thousands but millions of children year after year, we are even more dismayed, like the prophet Habakkuk who prayed, “O Lord, how long shall I cry for help and you will not listen? Or cry to you ‘Violence!’ and you will not save?” .

In a homily preached by Fr. Ansgar many years ago he said, “The feast of St. Stephen pulls us up short, like a dog tied to a leash. When it dashes across the yard to the end of its chain, all of the sudden, ‘Boing!’ It’s jerked to a stop.” The martyrdom of Stephen reminds us that the Child of Bethlehem later died in the violence of Golgotha. The birth of Jesus does not save us from suffering and death. On the contrary, following Jesus may intensify our suffering and even bring about an earlier death.

It happened to the Holy Innocents one evening when shepherds’ wives were humming the heavenly hymns of Bethlehem’s angels to lullaby their children to sleep. They heard the horrible thunder of galloping horses, and saw helmeted soldiers with glittering swords coming to cut each boy-child to pieces. These little martyrs died because of Christ. Had Jesus not been born, they and young Stephen would not have been slaughtered. 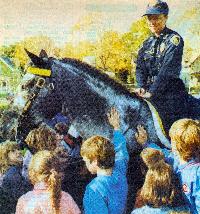 The world has not been saved from violence, suffering and death. It may even get worse.

I have a courageous niece who is a police detective in Madison, Wisconsin. She has investigated grievous crimes, the worst things that people can do to each other. It weighs heavily on her, but she works to protect the young and make the city a safer place to live. She is a person of deep Christian commitment but with a growing sense of anxiety about the world as we know it. Are years of trials coming? Is wickedness going to be punished? Are Christians going to suffer more and be martyred? Will life as we know it be no longer? Is there hope for the future?

When I consider the sufferings of martyrs like St. Stephen, I feel afraid of a painful death. Stoning someone who is young and healthy isn’t easy. They don’t get the job done with the first few rocks. It’s a long, hot business. To prepare for it they strip to the waist while someone watches over their clothes. What hope is there for me, because I try to avoid even mild discomfort? How can I be saved if faced with martyrdom? I can’t do it. 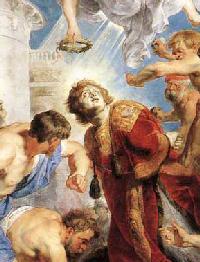 But martyrdom, and all that we suffer for following Christ, is not a work we do to be saved. It is a gift we receive from the life of grace that filled our hearts at baptism. Jesus said, “In the world you will have tribulation, but be of good cheer, I have overcome the world,” . We cannot overcome our fear. Jesus can.

We may still fear the future and persecution, but Jesus does not give grace to the imagination, 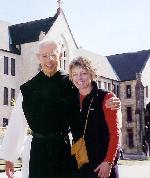 he gives it to the will. When the time comes we’ll have the courage of his heart and the words of his Spirit in us. The serenity of Stephen’s willingness to suffer and die stands in strong contrast to the violence of his persecutors. They were enraged and ground their teeth. They covered their ears, and with a loud shout rushed together against him. They dragged him out of the city and stoned him. They were suffering more as persecutors than Stephen was as a Christian martyr. He was filled with the Holy Spirit. He gazed into heaven and saw the Son of Man standing at the right hand of God. Kneeling down he prayed, “Do not hold this sin against them,” then he fell asleep. His life was not so much taken from him as offered by him. Because he already had the heart of Jesus he was able to overcome his suffering and death.

Such love stirs us with wonder and amazement. Even Jesus appears to be filled with excitement and hardly able to contain himself. Jesus had said, “From now on you will see the Son of Man sitting at the right hand of God,” but at Stephen’s martyrdom Jesus stands up, as if to encourage his disciple and to cheer him on like a runner in a race. Jesus saves by giving us his heart. On Christmas a Savior was born. On Golgotha he gave us his heart. By the strength and sweetness of his love we have the grace to run together with perseverance to everlasting life.