Homily for the Fifth Sunday in Lent at Mississippi Abbey 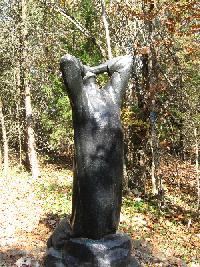 “Whoever loves his life loses it, and whoever hates his life in this world will preserve it for eternal life.  …  No one has greater love than this—to lay down one’s life for one’s friends” (Jn 12:25; 15:13).  Reflecting on the love of Jesus who laid down his life for us, Fr. Anton of Gethsemani Abbey told this story:

“In the woods, across the highway from the Abbey of Gethsemani, there are several larger-than-life statues of Jesus suffering the agony in the Garden, surrounded by his sleeping apostles. The statues are in memory of Jonathan Daniels, a seminarian in the Episcopal Church. In 1965, Jonathan , 26 years old, went to Alabama as a civil rights marcher to one of the poorest counties in America, where 80% of the people had never voted. He went to help them get registered and he was killed.  Witnesses said that when troublemakers started to act up, Jonathan protected a young black lady whom they were threatening. He saved her life by pushing her to the ground just as they fired a shotgun at her. Jonathan took the full blast in his chest. He was thrown back a dozen feet and died instantly.1 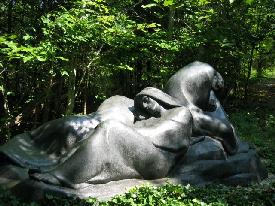 “What is it that brings someone to lay down his life for another? When Martin Luther King Junior heard the news he wept and said, ‘One of the most heroic Christian deeds of which I’ve heard in my entire ministry was performed by Jonathan Daniels.’

“Did Jonathan think of himself as a hero, as someone strong? Probably not. He had just written to a friend, ‘I can’t imagine that I have anything of any significance to give to the Church. But I really feel with all my heart, mind and soul that the Holy Spirit has picked me up by the scruff of my neck, and that I’m flying along with the mightiest Wind in the world at my back.’

“How do you get to the point where you can lay down your life for someone? Maybe Jonathan had learned to yield to others over the years, to give up his own will in a lot of little ways. Maybe he didn’t think physical death is the worst possible thing that could happen. When he saw ordinary people unable to help themselves, he felt the urge of the Holy Spirit to help. That’s where Jonathan found his strength.”2

Jesus so loved the world that he gave his life for us. Today, like Jonathan Daniels, Christians are laying down their lives for love of Jesus. When 200 members of the Catholic International Society of Saint Vincent de Paul were kidnapped in Syria the parents were told that if they did not deny their faith their children would be burned alive in the cages, and they themselves would be decapitated.3

I can’t imagine having the strength to accept and endure such a martyrdom. But God does not give grace to our imaginations, to imaginary martyrdoms. God gives grace to our hearts and wills when the time comes to make the choice to lay down our lives for love of him. 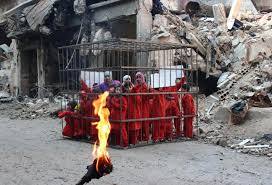 We are living in perilous times. There have been more martyrs in our lifetimes than at any other age in Christianity. You and I might never be martyred, but we want to be ready, to have the heart of a martyr.

So, during Lent as we follow Jesus in his preparation for crucifixion, death and resurrection we can prepare to lay down our lives for love of Jesus by asking every day for the grace to have the heart of a martyr. “Lord Jesus, may we have the grace of martyrdom so that we will never deny you, and so that we may endure and escape all that is to come and stand before you in joy when you appear” (Luke 21:36).

“All that is to come.” That includes not only the ultimate martyrdom of giving up one’s life, but even more the daily dying to self when we yield to others and give up our own wills in a lot of little ways. That is what Jonathan Daniels did, and that’s why he had both the heath and the will to be a martyr. In 1991 the Episcopalian Church designated Jonathan Daniels as a saint and celebrate his feast on August 14. “Unless a grain of wheat falls to the ground and dies, it remains just a grain of wheat; but if it dies, it produces much fruit. Whoever serves me must follow me, and where I am there also will my servant be”(John 12:24-26).