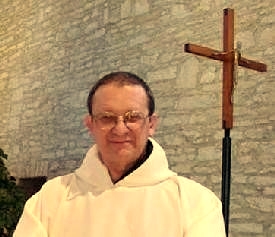 Fr. Jonah died unexpectedly a few minutes after compline Tuesday evening. The next morning at Vigils we had a verse from Ps 15, “I say to the Lord you are my God / My happiness lies in you alone.” I thought of Jonah and how these words apply to him in a special way. My happiness lies in God alone. You see in in 1993 he heard a phrase he wrote down and never forgot: “The secret of life is One Thing; stick to that and everything else is unimportant.” He goes on, “I knew my one thing was God and that the way to stick to Him was monasticism.”

Now I think we can all say our happiness lies in God alone, but we cannot in this life live it to the full. I am reminded of another Psalm that goes like this, I said to myself in my good fortune nothing will ever disturb me. Then you turned your head and I was put to confusion. God never turns away from us and he will never force us but he prune us so we bear more fruit. Our faith in God does not exclude us from the trials of life. When misfortune, rejection or failure comes our way, or depression or emotional upset, we can say my happiness lies in God alone but we say it in faith only since our feelings are anything by happy. God tires us as silver is tried to increase our faith, hope and love.

Now Fr. Jonah, purified through the mystery of his own life and death, can in all sincerity and truth say my happiness is in God alone. Jonah said he wanted to be a religious since the 6th grade. He was 53 when he was finally able to find a community, he could call his own. He had many setbacks along the way but he never gave up.  When I stopped to see him at the Sisters last Monday he told me about his journey to the promised land – the promise land being New Melleray and Mississippi Abbey, he loved saying Mass for the Sisters and he was really looking forward to his weeks retreat there a week or so ago but nothing seemed to work out as he planned.

He told me he lost his way after high school and it was not until 1991 that he had an experience he calls a miracle. In his own words he describes it: “While being thrown out of my sponsor’s house a feeling of peace come over me and a complete change in my interior reaction to, and basis for, life took place. I didn’t realize this was God and a conversion experience. This was out of proportion to anything I had done to deserve or earn it”.  This happened in 1991. To be still calling it a miracle 31 years later means it really was a miracle that changed his life completely. God wanted Jonah for himself and Jonah realized it and responded generously. A funeral homily is not meant to be a eulogy but more an expression of God’s actions in the life of the deceased. I believe Jonah was conformed to Christ at a depth we will never know. Jonah bore the passion of Christ in his body and soul. Because of his disabilities everything he did took more determination than we can imagine. But Jonah had a strong will and a determination to do God’s will no matter what. He was a great witness to all of us in perseverance in doing good.  In fact, he has done something that none of us have done – he persevered in his vocation to the end. Our vow of obedience is expressed in these words: “I promise obedience according to the Rule of St. Benedict until death” Jonah has fulfilled his vow. Now he can really say, “my happiness is in God alone”

I have found that in the monastic life we always end up in a job that fits us. It may take years and years but in general it does happen. When Jonah was a junior professed some thought he was going to the guest house too much. He was drawn by an irresistible force to mix with the guest. Little did we know how this would blossom when he was a mature monk. Jonah became guest master and retreat director and confessor to hundreds of people who were drawn to the monastery for a multitude of reasons. Jonah excelled at helping people in distress. It was a gift learned through his own daily dying to self as the Gospel today tells us. I think we can apply Our Lord’s words to Jonah: “unless a grain of wheat falls into the earth and dies it remains just a single grain; but if it dies it bears much fruit” Jn. 12: 24.  Falling into the earth and dying is not a onetime affair, it must happen over and over.  One self must die that another can be born. Paul tells us that even though our outer nature is wasting away our inner nature is being renewed day by day. “For this slight momentary affliction is preparing us for an eternal weight of glory beyond all measure,” 2Cor 4:16 – 17.

To us Jonah’s death seemed sudden and unexpected but that is because we only have limited knowledge of God’s will. God saw that Jonah was ready for the eternal weight of glory beyond all measure and took him to himself. God’s ways are not our ways.

Today we celebrate Jonah’s passing from this life to eternal life and praise the wisdom of God for the life and death of our brother Jonah.