Homily for the Funeral of Br. Placid Zilka

Jesus recognized himself in things, a vine, a door, a cup of water, today a grain of wheat. It was not just the thing though that mirrored him back to himself, but the thing’s shall we say destiny or vocation. In this case, death but death for a purpose, a yield of much fruit. This is not a bad method for any of us to use to find out who we are in God’s eyes, what our vocation is. Do you identify with a mountain, maybe, a black lab, a rose, a forest, a mushroom, a lake? Follow that identification, backwards to the origin of the thing in question, forwards, to its end, and don’t leave out the intermediary stages, the transitions, where the pain usually is, the sacrifice, the loss necessary for fullness unimagined. Jesus was a carpenter, they say, not a farmer, but he liked agricultural images: trees, soils, seeds, and fruit. So he probably had experience tending a garden, at least a small one. Mary Magdalene at the tomb was on to something when she thought he was the gardener, and not just a gardener, but the gardener, of which we know from Genesis 2 there is only One, all the others and farmers too just filling in for him, as he ordained they should do: tend the garden for him, watch and keep it. 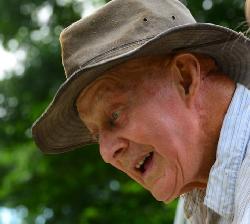 There was always that teleology to things, that directionality that issues into something hinted, promised maybe, but not there just yet, even sometimes doubted as at all possible, that Jesus saw in things that helped him express who he was, like the woman in labor in anguish giving birth to a child is in joy. Jesus to be a little while not seen so to be in a little while seen, was something he learned from watching seeds and small plants and also amorous relationships among fellow humans, and was what he meant by Resurrection from the dead. Any bible-literate gardener even on a tiny urban balcony will mull over the grain of wheat falling in the ground and dying, the seed on this soil and that, the sick tree and the healthy tree. Certainly Brother Placid did, a hundred-fold, and as Saint Bernard said about himself, learned as much or more from woods and rocks than he ever did from books alone. Placid did his high school GED in the Air Force. Work was his thing, but work with a direction always, and the satisfaction that comes at harvest, the sanctification, too. One of fifteen siblings born on a farm in Flensburg, MN, Placid who was Antony Paul was age five or so when his father took him and a gaggle of brothers out to mend fence after the winter ice and snow. Little Placid got distracted and began playing with the dogs till his father took him aside and explained about Adam, and the garden, and that by the sweat of your brow you shall eat bread until you return to the ground from which you came, and that he and all of them were Adam, and right there, so Placid told it just a few weeks ago, he got oriented for life. He read Jesus in the vines, the trees, the melons and pumpkin, each a miracle hiding more seeds to be hidden and die and produce again. 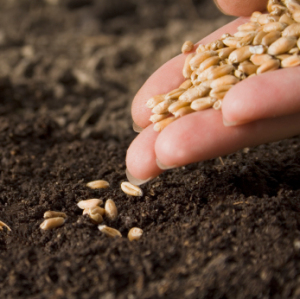 He learned Passion, Death, and Resurrection and evangelized how many of you sitting here, and how many Monastic Center people, and neighbors’ kids, and candidates over decades who probably have never forgotten. The hour has come. It is where everything was always leading, that hour, or just the other side of it. Placid, like all of us, walked by faith, not by sight, but all the same, aspiring to please the Lord bridged the gap and undoubtedly a lifetime of aspiration makes the bearing of the weight of glory like something almost natural, like being at home for the first time. Before he slipped into his deep and lengthy sleep Placid liked you to read scripture to him. What shall I read from? Read from the Song of Songs. Yes. OK. Here’ something: “Arise, my friend, my beautiful one, and come . . . . A garden fountain, a well of living water, streams flowing from Lebanon. Awake, north wind! Come, south wind! Blow upon my garden that its perfumes may spread abroad. Let my lover come to his garden and eat its fruits of choicest yield. Eat, friends, drink! Drink deeply, lovers!”