You might think it is strange that we have selected a passage from Christ’s Passion for today’s Gospel. After all we are just beginning the Octave of Easter and this funeral Mass for Fr. Tom is a Paschal celebration. But, there are a couple of reasons we chose this Gospel. First of all it was the Gospel read on Good Friday at about 3:30 PM. Just three hours before Fr. Tom died. The other reason is that it struck me the way St. John describes Jesus’ death is similar to what we witnessed in Tom’s death. St. John says Jesus, “bowed his head and handed over his spirit.” This is very close to what Fr. Tom did on Good Friday also. There were five of us in the room with him. He slowly stopped breathing and handed over his spirit to God. This was a final act of sixty years of surrendering himself to God. It was a beautiful, peaceful death—just like his life. The final reason we chose this Gospel is because St. John describes Jesus on the cross not in great suffering, as say, St. Luke does. There are no cries of abandonment or intense physical suffering. Jesus is shown on the cross more with his spirit shinning forth in the midst of suffering. Our processional cross interprets this by lifting the corpus up as if Jesus was ascending to heaven right from the cross. It is a Resurrection cross, as it were, and we should never forget that the cross is not the final scene in the life of Christ. Fr. Tom was not a strict liturgist but I cannot think of a more liturgical way to make his transitus than to die on Good Friday and be buried on Easter Tuesday. 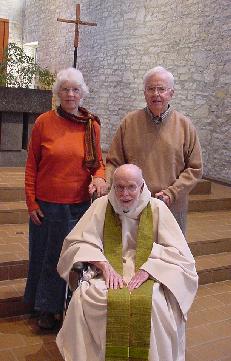 I want to say a few words to Neil and Pat. You have our sympathy on the loss of your brother. You know he loved you and your visits were a great joy to him especially your family reunions here. Also, I want to offer our sympathy to all his nieces and nephews and other relatives. You lost a wonderful uncle. He was extremely interested in your lives and marveled at the diversity of life styles. He would come into my office every once in a while and give me a run down on the ins and outs of your lives. We would both be in awe at your creativity. He enjoyed sharing news about you. I have a brother-in-law who told me “I raised my children to be independent and have succeeded far beyond my expectations!” Maybe Neil and Pat could say the same thing.

I am sure you will all miss him and I am also sure the place you held in his heart is still there. How it will play out in your future lives is all part of the mystery of the communion of saints. You who were such an important part of his earthly life will be more important in his heavenly life.

As you know Fr. Tom never rushed into anything—he never rushed period. However, there was one occasion when he made a spur of the moment decision which changed his whole life. That was his decision to join the monastery. You all know the story but I think it bears repeating—in his own words. After the war he was really knocking around trying to figure out what to do with his life. He visited some universities to check out graduate school. One such place was the University of Iowa. He stopped at New Melleray on his way home just out of curiosity. He planned to stay one day. He arrived on Holy Thursday, I believe, and decided to stay over Easter. On Easter Sunday at noon he called a friend. Here is how he says it: “I called a girl in Milwaukee who had invited me to a party Easter Monday, to tell her I would be there. Sunday evening, as I was resting in my room, all of a sudden I realized that, ‘this was it’. I don’t think I ever was so happy in my life.” That was Easter, 1947. This is Easter 2007. Sixty years of history on that one quick decision. Given Tom’s temperament, if this isn’t a miracle I don’t what is. His decision had plenty of time to be tested over those sixty years and so it was and it held up. Maybe decision is not the right word, it was more like enlightenment in which he saw in that one instance the meaning of his whole life. I have a firm belief that Fr. Tom would say of his sixty years as a monk, “I don’t think I ever was so happy in my life“. 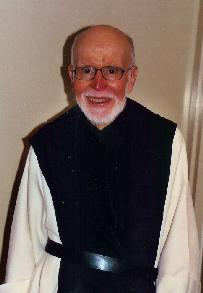 Fr. Tom was novice master for ten years and some of his novices are here to testify that he gave us a good formation. I found him especially helpful because he was so easy to approach. He did not have a big monastic persona that would scare you off. He plodded along like the rest of us and to me that was life saving. Novices were pretty isolated in those days having only the novice master to talk to. He was our one reality check. He was always there to tell you, no you are not going crazy this is just the normal path into the life of the spirit. In his teaching he was clear and thorough, and thorough and thorough. He liked to get back to the beginnings, I think he began his life of Br. Conrad somewhere in the ice age and worked up to modern day Ireland. He loved diagrams and maps. He mapped out salvation history for us and to this day I could put it on the board in every detail. In those days novices classes were called repetitons for a reason. I have found that in the monastery and perhaps outside it the people who leave a lasting impression on us are the ones who in their dealings with the inner soul are the ones who are kind and gentle and authentic. These were Tom’s gifts to us and to others whom he helped along the way. I received an email yesterday from a long time friend of Tom’s. She said that a local priest recommended Fr. Tom as a spiritual advisor, so she called him. “I will never forget that first telephone conversation” she writes, “especially the long pauses between my comments and Fr. Tom’s responses. Eventually we agreed to meet. At our first meeting, following the initial introductory comments, Fr. Tom paused and said, ‘Well, I guess the important question is…Is there a God?’. Oh my goodness, I thought, am I ever in trouble if this holy monk is asking this question.” She goes on to say, “My husband and I told Fr. Tom often, that having him as an intercessor to pray with us for our family, was the greatest support to us as we raised our children and welcomed six grandchildren.” I am sure Neil and Pat could say the same about his help with their twelve children. She closes her letter, “Farewell, Fr. Tom, thank you for your faithful witness to the Resurrection.”

We, too, have to say farewell to our brother and friend and uncle. What a blessing to have lived with him, a great gift to our community and to so many others. Fr. Tom never lived in fear of death, quite the contrary, he looked forward to it, like St. Paul whom we chose for the second reading today because he sums up Tom’s mind perfectly, “…we are full of confidence and would much rather be away from the body and with the Lord” . “The lives of all of us are to be revealed before the tribunal of Christ,” writes St. Paul. . What a glorious moment that will be for Tom. He will be utterly shocked to see his life shining brightly before the God who made him. 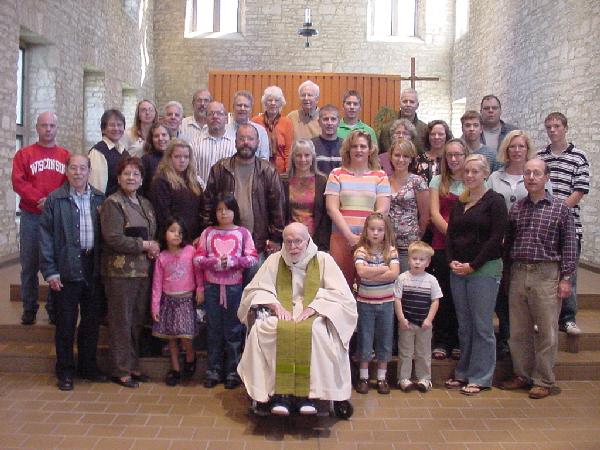