Homily for a Mass for Christian Unity

Here are two stories about the importance of unity, not only among Christians, but also between husbands and wives, children and parents, friends and teammates, and members of religious communities. 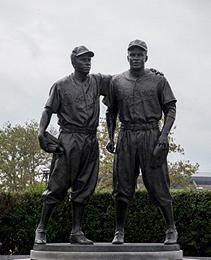 The first story is about the Lone Ranger and his Indian friend, Tonto.  They were riding through a canyon together when all of a sudden tribal warriors dressed for battle blocked the way ahead of them and behind them.  The Lone Ranger turned to Tonto and said, “What are we going to do now?”   Tonto replied, “What do mean by ‘We’ Whiteman?”

The second story is about Jackie Robinson, the first African American to play in the major leagues.  Breaking baseball’s color barrier was hard.  He faced hostile crowds at every game.  While playing for the Dodgers in his home stadium on Ebbets Field in Brooklyn, he made an error.  The crowd began booing.  Jackie stood at second base, humiliated while the jeering went on and on.  Then shortstop all-star, Pee Wee Reese, went over and stood next to him.  He put his arm around Jackie’s shoulder and together they faced the fans.  Suddenly the booing stopped and the fans grew quiet. Later, Robinson said that Pee Wee’s arm around his shoulder saved his career.

The moral of these two stories is this: divided we fall, united we stand.