Memorial of Our Lady of Lourdes at Mississippi Abbey

Homily for Memorial of Our Lady of Lourdes at Mississippi Abbey

Leon Bloy, the French novelist and poet, who helped lead Jacques and Raissa Maritain into the Catholic Church, was most impressed by the tears of the Blessed Virgin Mary during some of her appearances, especially at La Salette.  It made him skeptical of devotions to Mary that sought escape 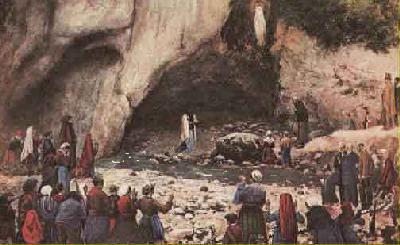 from the crosses in life.  He writes, “There are two things I have yet to see, first, a Christian in good health going to Lourdes in order to beg for the blessing of illness; second, a wealthy Christian who is cured at Lourdes by an unquestionable miracle, who returns home and distributes his possessions to the poor.”

He would not have to look any further than Bernadette, herself.  She suffered from rheumatism, asthma, bone infections, vomiting, spitting of blood, and painful tumors on her knee.  Someone asked her, “The waters of the grotto cure other people, why not you?”  She replied, “Perhaps the Blessed Virgin wants to make good use of my suffering.”  Once a sister in her convent rebuked her, saying, “What are you doing in bed, you lazy thing?”  Bernadette said, “Why, I am doing my work.”  “And what is that?”  Bernadette answered, “To be ill.”

I wish that I had her courage and generosity in suffering.  But there is something else that I can identify with in her life.  As she was approaching death she said, “I am afraid.  I have received so many graces and made so little use of them.”