Memorial of Saints Martha, Mary and Lazarus at Mississippi Abbey

Homily for Memorial of Saints Martha, Mary and Lazarus at Mississippi Abbey

“We will do everything the Lord has told us,” say the Israelites. And “the Jews were coming to believe in Jesus.” These are declarations of awareness of what is important and of intention to adapt self to suit the truly important in preference to the merely satisfying. The Israelites and Jews are adopting what Dietrich von Hildebrand calls a “fundamental moral attitude.”[i] That attitude is reverence. It is the first of St. Benedict’s 12 steps of humility.

The soul of every morally good attitude is interest in a thing because it has value, because it is intrinsically important. We defer to that importance. That is why the soul of Benedict’s Rule is preferring nothing whatever to Christ. Whether we choose or reject something that is agreeable depends on the pleasure each person finds in it. 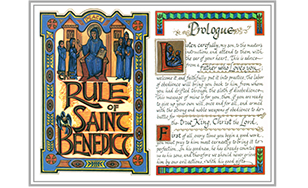 Reverence, Hildebrand says, is the mother of all moral life. It is a position we take toward the world only if we adopt a spiritual way of perception.

The Holy Rule, especially in the first seven chapters, addresses the two types of irreverence: pride and concupiscence. The prideful one holds sham superiority toward things and is unable to appreciate them from within self. Things—including persons—only have significance for as long as they increase one’s stature. The concupiscent one limits interest in a thing—including persons—to whether it is agreeable and can offer satisfaction. 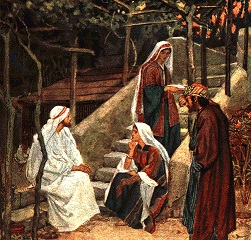 Neither kind of irreverent person can let a person or thing reveal its inherent value on its own. So Benedict teaches his disciples this kind of disposition by requiring a contributive rather than using attitude toward the community in chapter 4; a receptive attitude in Ch. 5, and in Ch. 6 a silent attitude that allows time and space for persons and things to reveal their inherent worth. In Ch. 7 we begin a program for revering that.

This is how the Jews “came to believe.” It’s how anyone comes to believe. You pay attention. You let the person of Jesus Christ impress Himself upon you. This impression, this disposition that urges reverence is called “Simplicity.” It is a way of life united by one principle. The Israelites, whose lives have become complicated, find that this centering on One Thing does not obscure the complexity of their lives, but rather illuminates it. That can only happen if their way of life is unified and integrated by the love of God. Martha, Mary & Lazarus find this in Jesus Christ, the One Who gives power, gives grace, gives the Holy Spirit. To center one’s life on anything less is merely an obsession. The simplicity of faith in Christ is not just a way of life,but a unity of life.  It is the prerequisite for reverence.

So we are impressed that the merits of Jesus Christ are His own, not merely an “agreeable” effect on self. This impression differentiates the chief priests from the people. It is the first step in the art of being human when the human is clear about what matters most. It is reverence.